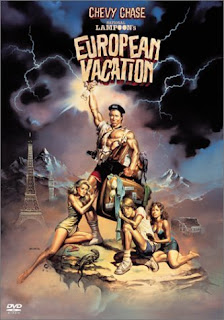 Clark Griswold and his family, wife Ellen and teenage kids Rusty and Audrey, attend the "Pig in a Poke" game show and accidentally win the grand prize: a trip to Europe. Leaving their home in Chicago, the Griswolds arrive at Britain first, where they accidentally injure a bicyclist and destroy Stonehenge. They continue their journey to Paris where their kids start feeling homesick. In Germany, Clark doesn't find his cousin Fritz but some other guy and spends the night in his home, but they make the people angry and flee to Italian soil. Finally, they return home.

Sequel "National Lampoon's European Vacation" proves that the director Amy Heckerling has problems coping with a weak screenplay, while the more talented Ramis had enough skill to make the best out of the original "Vacation". The problem isn't so much that the story just repeats itself - instead of a car trip through America, the Griswolds travel through Europe - as much as the fact that Heckerling doesn't have style, turning the film into a tasteless, vulgar, cheap and poorly humorous as a whole, full of crude humor and stupidity (the fantasy sequence where Audrey is imagining she is uncontrollably eating more and more in Europe until she becomes grotesquely fat is truly pointless), with horrible comic timing and rhythm, and gratuitous erotic (a Bavarian girl displays her breasts for Rusty), but it still once again became a hit at the audience, causing another sequel to be made. Still, despite cheap humor, Chevy Chase here and there manages to make few scenes poignant and funny, while some of the cameos of famous stars in different countries are rather neat, like the appearances of British actors Eric Idle, Mel Smith and Robbie Coltrane in Britain or German comedian Willy Millowitsch in Germany. "European Vacation" is a truly weak and thin comedy that was barely saved from becoming unwatchable by pure chance of efforts of some involved.