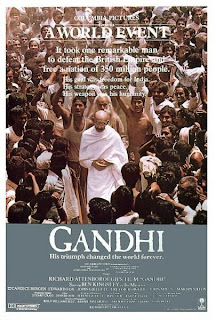 South Africa's territory, 1893. Gandhi is traveling first class in a train as a lawyer, but gets thrown out by the British because he is not White. Shocked by that fact, he starts protests demanding equal rights for the Indians there, together with his colleague Kahn. In '15, he returns to India with his wife Kasturba and gains considerable popularity, resulting in efforts to make his country gain Independence from British colonialism. But he wows to do that with peaceful means, like non-cooperation or strike. Gandhi himself lands in prison for several years, but continues his vision, symbolically claiming Indian salt for Indians. After World War II, India finally gains Independence, but has to be split with Pakistan. Brutal fights against Muslims and Hindus erupt, but Gandhi stops them by fasting for peace. In '48 he is killed by an assassin.

Mahatma Gandhi is such an amazing, unique and visionary person that it's hard to make a film that gives his life justice. Richard Attenborough's "Gandhi" is an interesting attempt to do so, but after seeing it a sad feeling remains that we did not learn everything from main protagonist's private life. The director depicts many of his events in great detail, but at the same time it is hard to shake away the feeling that the film is slightly too conventional, stiff, mechanical, standard and that the director displays Gandhi's wisdom, but cannot quite comprehend its origins. Still, it has many virtues, among them the brilliant Ben Kingsley as the main hero and a wonderful ode to Pacifism, which justifies slightly the film's many prizes and awards for best picture - even though there were at least 10 better films than it released that year. "Gandhi" starts out like Lean's "Lawrence of Arabia": with the main hero dying and then the story of his life getting told in flashbacks, and even later on it is obvious the authors are trying to imitate Lean's style with spectacle and massive crowds. It may be that the story plays out like a history lesson, but many of past events cannot be exactly imagined by the raw descriptions in history books until they are three dimensionally displayed on film: the minute the scene where a young and enthusiastic Gandhi gets thrown out of the train by the British because he is not White hits the screen, the viewers immediately get hooked and understand how hard it was to live back then when British Colonialism and racist laws were nothing different than Apartheid - to make matters even more interesting, the harsh critique of British oppression was directed by a British director, Attenborough.

Even later on, the film is filled with very insightful moments: at one meeting in a fancy mansion, the Indian leaders are arguing how they "don't want to be slaves" while a Indian butler is about to serve them tea, but that prompts Gandhi to take the dishes from him and serve the tea to them himself, saying: "I want to change your consciousness". At one conference, Gandhi cleverly says to the British: "We think it's time you recognized that you are rulers in someone else' home". And many of his anti-violence speeches, like "An eye for an eye only ends up making the whole world blind", really are admirable and spiritual - and sometimes even slyly humorous, like the where his wife calls him to help her in their home and he jokingly says: "Even here we are surrounded by tyrants". Gandhi is truly a fascinating personality, a one that's far more interesting than the film itself, which is directed without that special spark that would stimulate the audience and some of the crucial events are left heavy handed or unclear - for instance, the passive Pacifism of the Indians is displayed in only two sequences, the one where a general is shooting at an unarmed crowd and the one where a group of Indians just passively walk towards the prison while the British soldiers beat them up one by one. But despite all the flaws, one can always sense a difference with a pure film talking about loyalty and emotions and a unique person that preached love instead of hate, causing ironically in a unusual situation where the Hindus who were turning the other cheek where bigger Christians than the British soldiers.