Asterix and the Big Fight 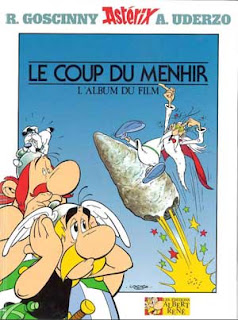 When Getafix was out in the forest, a group of Roman soldiers tried to capture him so Obelix threw a menhir towards them to chase them away. Unfortunately, the giant stone fell on Getafix, causing him to loose his memory and forget how to make the magic potion. At the same time, the villagers get fascinated by a false prophet, Prolix, who starts collaborating with the Romans: for a bag of gold, he scares the Gaul villagers by falsely predicting their village is doomed. The Gauls escape and the Romans conquer their village. But then Getafix regains his memory, makes a magic potion and the Gauls conquer their village back. Obelix drops a menhir on the prophet.

Curiously, the quality of the animated "Asterix" serial seems to follow a circle: it started off with a weak first film, then became better with subsequent sequels, turned great in its prime, just to diminish and degrade back to weak quality with the 6th instalment, the poorly executed and heavy handed "Asterix and the Big Fight". Although an animated film for kids, this sequel turned out surprisingly depressive and black, more than any other, maybe because the authors wanted to aim at deeper emotional understanding of the characters, but pretty much nothing works here the way it should. This too serious story is not funny or clever at all, lacking any kind of inspiration, relaying too much on frenzy and deranged dumb ideas, like Getafix's phantasmagorical hallucinations (Obelix as a fat pig, a Roman soldier turned into a dragon by taking a sip of his magic potion...) that completely abandon the original charming French vision and present a weird allegory on Alzheimer's disease. As if the authors wanted to keep the attention of the viewers with the help of insane and loud scenes, instead of intelligence and self confidence. The two stories - one revolving around the insanity of Getafix, the other about the naive villagers who trust the fake prophet - actually work together, but maybe just because both of them are nonsensical and irritating. Here and there a few good gags show up (the shadow of the flying Roman stopping at the road crossing to let the shadows of flying ducks pass), but it's too little, and combined with "dead" characterization of Asterix and Obelix, who were practically demoted into supporting side characters in the story, the movie is ultimately a failure.