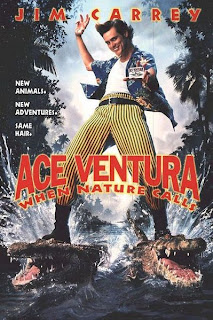 Ace Ventura experiences an accident on the Himalayas when an animal he was supposed to save fell down in the abyss. Devastated by guilt, Ace closes himself in an Tibetan convent where he is visited by the adventurer Fulton who offers him the assignment to find a missing bat in Africa. Ace accepts and finds out there are two tribes there who are on the brink of war because of the bat that is a sacred animal to them. He finds out the bat was kidnapped by a rich man who plans to buy large portions of land cheaply after the tribes destroy each other. Ace stops him and returns the bat to the tribe.

Distorted and disturbed comedy full of deformed gags that spin between childish and rough style for adults, "Ace Ventura: When Nature Calls" is an even worse contribution to the Ace Ventura franchise but it still payed off thanks to the fact that it became a big box office success. Viewers who are accommodating and tolerable will probably have fun with this, but generally the more ambitious audience will conclude that the sequel copied too much gags from the original (Ace putting his hands on his buttocks and then "talking" through them, obviously loosly copying a scene from "Pink Flamingos") and that it's just a commercial exploitation of the same old stuff. Hapless Jim Carrey probably didn't love remembering this movie later on in his career, after he made a few serious and respectable films, if anything then for the scene where he is hot and naked in an mechanical rhino and then escapes through his anus, looking as if the animal gave birth to a human, which should have won an prize for the most disgusting scene of 1995. The authors of this second feature fill the standard heavy handed story with vulgarity, without the style of lets say Farrelly brothers, until everything gets lost in irritating tone. That way "Ace Ventura 2" is even bellow the level of it's own cartoon show. Jim Carrey has many fans, but movies like these really don't offer that much of a reason to be a fan of anything.