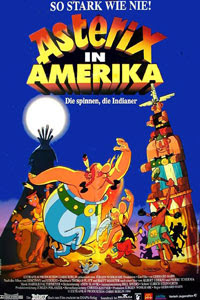 After he gets humiliated in front of other senators in Rome because of the news that the Roman soldiers were once again beaten by the small Gaul village, Caesar orders Lucullus to settle the matter once and for all. Lucullus kidnaps Getafix, the druid who makes the magic potion, ties him up on a ship and sails to the west to throw him over the edge of the world. Asterix and Obelix follow in a small boat and spot Getafix getting catapulted over horizon. They follow and land in America. Once there, Asterix and Getafix get captured by the Indians, but they are freed by Obelix and make friends with an Indian girl, Ha-Tschi. After they defeat the evil medicine man, they return to Europe and save their village.

Comparing the 7th installment of the popular film serial based on the comics by Goscinny and Uderzo to the previous superior "Asterix" films from the '70s and '80s would be as if one would compare "Simpsons" season 19 with season 4 or 5, since the German authors completely lost from mind the possibilities of comical situations, events and irony in the story: instead, all we have here is simply the Gauls coming to America, leaving America, the end. From the technical perspective, the film is really good: the cinematography is great, the animation - among others obviously influenced by the staff of D. Bluth - is good, even using CGI in the storm sequence, and the only bad thing is the annoying music. But from the creative perspective, the film is just a thin children's story with too soft elements to intrigue, losing the precious satirical humor from the previous "Asterix" films and turning into an autopilot vehicle. The jokes never go further than cute, and it's sad that of all the rich possibilities the authors managed to get only one, only one really clever gag - the one where the two heroes enter America and pass by Mt. Rushmore with heads of Indians instead of the American presidents. The rest plays out like an uninspired, moderate cartoon from the 50s, while Asterix and Obelix were never quite so stiff and mechanical like here. Still, there are two really powerful virtues present here. One is the truly charming character of the irresistibly cute Indian woman Ha-Tschi, the other one the sad farewell sequence where Obelix says goodbye to her and she starts crying, a moment of rare raw beauty that somehow got lost in this film and managed to sparkle with full power.