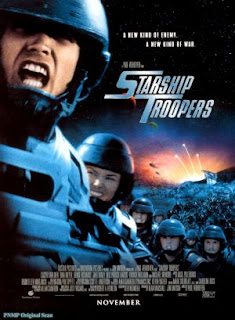 The 23rd Century: an army TV spot calls for everyone to enlist in order to fight against the giant bugs, the Arachnids, who inhabit the planet Klendathu, situated on the other side of the Galaxy. Those who don't serve the army, can't become citizens. Meanwhile, in Buenos Aires: the love of school days with Carmen is something the young and rich Rico wants to keep by enlisting to army with her, but since he is assigned as a trooper and she as a pilot, they break up. After a meteorite falls on Buenos Aires and the bugs are blamed for it, Rico and the girl who admires him, Diz, are sent to fight to Klendathu. He looses her and many of his friends, but saves Carmen and captures the giant "brain bug". The fight continues.

Bizarre and shrill, "Starship Troopers", a loose adaptation of Robert A. Heinlein's novel, are maybe even the best American film by cult Dutch director Paul Verhoeven, a spectacular satire on militarism, making some revisionist critics even go so far to call it an "accidental" satire on the War in Iraq and compare the fall of the meteorite in the film with nine eleven. It's incredible what Verhoeven and writer Edward Neumeier did out of that seemingly normal futuristic action story to make it go in various directions: the film works both as an antiwar and war film, as an right-wing and left-wing sympathy, as a critique of the government and black comedy. One especially needs to maintain on that last one. In that imaginary world, a totalitarian government rules the world and every civilian who wants to become a citizen must serve the army for 2 years; when a girl is asked why she serves the army, she replies with: "To get a baby license"; the giant bugs are so demonized that a TV propaganda spot shows how "even kids are helping to fight them" by squashing some small insects on the street; Mormon extremists that have built an outpost on the bug planet were killed; professor Rasczak, who lost his arm in war, proudly gives his students lessons like these: "Violence has resolved more conflicts than anything else. The contrary opinion that violence doesn't solve anything is merely wishful thinking at its worst".

Even though it's a very sneaky irony, one can't but chuckle at it's black humor. Indeed, Casper Van Dien and Denise Richards look almost like some Barbie dolls and many of the teenage dialogues look as if they come from a soap opera, but it seems that was the point - namely to show how naive and shallow they are, immediately enlisting to fight in some vague war with the giant bugs from a distant planet: nobody asks such logical questions like why some dumb bugs, who don't have any technology and are thus unable to leave their planet, that is evidently situated on the other side of the Galaxy (!), are so dangerous to Earth? Professor Rasczak mentions Hiroshima, but never wonders how the bugs were never a threat to Earth in the past, before they were even discovered probably with progression of space exploration. The whole battle with the bugs seems as pointless as fighting with an earthquake, and the story even hints that the soldiers are purposely let to fight bugs on the ground instead of just bombing them from the air in order to exploit the victims for the war machinery. Indeed, it's an action film, but very effectively made, deliberately becoming almost unbearably violent towards the end to show where the things are inevitably leading, thus one just needs to quote Rasczak to describe it: "Never pass out a good thing".