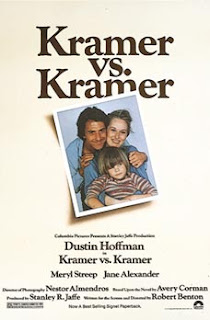 New York. Ted Kramer is happy because he has just been promoted in his advertising agency, but a shock awaits him at his apartment: his wife Joanna simply leaves him. Left alone, he has difficulties taking care of their 7-year old son Billy due to his tight job schedule. His neighbor Margaret help him take care of him. After a year, Joanna shows up again and ignites a custody battle over Billy, at a very troublesome time for Ted who lost his job. At the court, Joanna gets custody over Billy, but decides to let him stay with Ted anyway.

Although very conventional and ordinary drama, "Kramer vs. Kramer" roused a big attention from the critics and won 5 Oscars and 4 Golden Globes (including best picture and best actor), beating out Coppola's "Apocalypse". The movie owns such a success mostly to the sophisticated, quiet, subtle, simple and considerate direction as well as restrained, authentic and unbelievably convincing performances by the actors, whose characters seem like real people and their small, "trivial" problems close and easily recognisable, more gripping than some spectacular epics. "Kramer" is an unpretentious drama about divorce and the deterioration of family life by job consumption that never blames either side for the problem, a touching everyday story that makes the viewers laugh and cry with ease without turning out embarrassing or reaching for soap opera cliches. Especially marvelous is Dustin Hoffman as Ted Kramer, who once again showed his range - even though Sellers deserved the best actor award that year for his fantastic role as Chauncey Gardner. Only a few occasional flaws bring it down, like the slightly heavily melodramatic scene where Billy injured himself by falling on the floor in the playground and has to be brought to a hospital, or the very sweet, but underused small role of JoBeth Williams who deserved more than just a quick 2 minute role of Ted's one night stand Phylis who accidentally goes to the hallway naked, wearing only glasses, and accidentally stumbles upon Billy, much to her dismay.