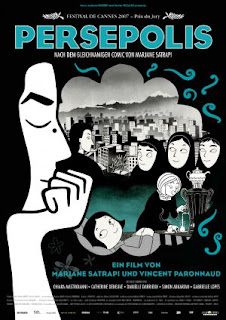 Tehran, '79. Marjane Satrapi is a little free-spirited girl who imagines she will become the last prophet and that she talks with God. When the Islamic revolution starts and the people overthrow Shah Muhammad Reza Pahlavi, their parents optimistically look at the future in their country. Yet, the new Islamic hard core government forbids everything from the West and forces women to wear head scarfs, something that bothers Marjane. When the Iran-Iraq war starts, her parents send her to a French school in Vienna, but even there she has hard time to fit in with the crowd. She has nihilist friends and breaks up with her boyfriend, returning back to Tehran. As a woman, she goes to live in France.

Some time ago, Sean Penn visited Tehran and accidentally stumbled upon some fans, among them some girls who saw his film "21 Gram", which contains movie sex scenes even though they are forbidden as immoral under the Iran government. A natural question came to me, namely how does a free spirited, extroverted girl live in such a rigid, introverted society, and I'm glad someone answered it in the form of this shining animated film, "Persepolis". Funny and sad, cheerful and depressing at the same time, this unusual story is shot in caricature black and white animation, but already some 5 minutes into the film will the viewer get use to it and only get absorbed by its gripping content. It's rather surprising that the Iranian government tried to sabotage this film for allegedly turning out "anti-Iranian" since it's never against Iran or Iranian people - just against oppression in general.

Also, it doesn't hesitate to criticize the West too: the small regression in which it is implied that the US has been supporting the tyrant Shah for decades, which led to such disgust of the people that after they overthrew him they decided to not have anything with the West no more, simply sums up almost everything what is needed to give insight into why the circumstances in Iran were the way they were. Also, author Marjane Satrapi just shows her autobiography which, although exaggerated, contains a lot of truth - for instance, the scene where the art professor is teaching the class about Botticelli's "The Birth of Venus" ignites laughter because the whole painting is censored for nudity and only the face of the woman is seen, yet when one realizes that this was actually happening in Iran, the whole thing gains a tragicomic context. In a society where the concept of sin has been so overstretched that people can get in trouble just for listening the Bee Gees, wearing lipstick or a t-shirt that states "Punk is not Dead", Satrapi managed to craft a hilarious piece of observation about her free spirit that is at times contagiously fun, culminating in the fantastic "Eye of the Tiger" song sequence that should be considered a classic. Although slightly tedious, "Persepolis" is a real treat.