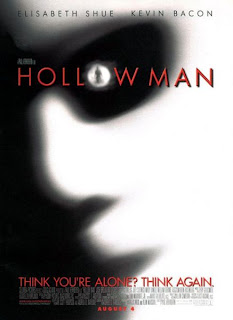 A rat is walking through the cage. Suddenly it is killed by an invisible gorilla. The author of the incredible invisibility serum is Dr. Sebastian Caine who works for the army in an underground laboratory and decides to test it on himself. Even though it hurts, the experiment is successful, except for one problem: what ever the crew does, they can't make him visible again. Invisible Sebastian slowly starts loosing his mind: he rapes a neighbor, kills a dog and captures his colleagues bellow the surface laboratory. He kills them all except Linda and her friend who get stuck in an elevator. She releases the elevator and Sebastian dies in it.

The theme of an invisible man was always great, but for some reason "Hollow Man", despite the fact that it's a very suspenseful film, ruined it by falling too deeply into trash, cheap ideas and explicit violence. It's hard not to think of previous invisible man movies from which some ideas were obviously stolen for this one, but the director Paul Verhoeven managed to invent some of his own: for instance, when Linda (Elisabeth Shue) is looking directly into the camera and talking, but between them is the invisible anti-hero or when Sebastian is annoyed by a pesky fly and thus takes his glove off and captures it with his invisible hand. Maybe it was a mistake to delete the scene where the invisible Sebastien rapes the neighboring woman since it would have shown how scary and disturbing that concept could be, yet as a whole the movie was simply written in a wrong way: Kevin Bacon said in one interview how it was a strain dressing up in numerous costumes, but it's an even bigger strain watching how his character was transformed into a villain for no clear reason, Verhoeven's direction is this time just a harassment while the, admittedly not hollow, but thin, banal, cliched, primitive, transparent and too serious story wears out too quickly.