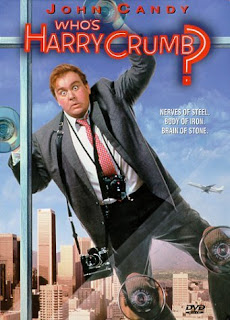 Jennifer, the daughter of the rich family Downing is kidnapped in a wealth studio. Her father hires the chief of a detective agency, Eliot, to find her. But he doesn't know that Eliot actually organized the kidnapping in order to get a lot of money, and so, hoping he won't get discovered, he hires the equally fat as clumsy Harry Crumb to investigate the case. Harry teams up with Jennifer's sister Nikki and slowly starts finding clues and suspects Nikki's stepmother Helen and her lover, the tennis coach Vince. Disguising himself, Harry actually solves the case and Eliot gets arrested, thus enabling him to become president of the company.

Canadian comedian John Candy made a notable career in the US and who knows what he could have made if he hadn't died so early. Or had better offers in films. "Who's Harry Crumb?" is a typical trivial comedy where he was hired to play a clumsy detective with crazy red hair in order to add it some taste, in which he succeeded, even though the syndrome of tiresome writing and predictable gags was not avoided. It's a matter of a light, short and likeable comedy that isn't anything extraordinary - director Paul Flaherty tries to ignite the humor by queuing a whole bunch of gags, but they are mostly too thin to really make anyone sate while it seems the authors openly imitated the characteristics of Inspector Clouseau since Harry loves to disguise himself into various people, while there is even a scene where he hears voices of two actors from TV and mistakenly thinks their plans are real, just like in one of the Panther films. The worst part turned out to be the humiliating and mean spirited role for actor Jeffrey Jones whereas even the ending has it's problems since it ends well but is as a whole rather incorrect.