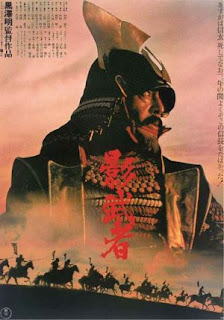 Japan, 16th Century. Lord Shingen Takeda leads his army to a campaign against Kyoto. His biggest enemy is Nobunaga. One day Takeda hires some thief to play his double, since he looks almost like his twin. when Takeda dies, thief Kagemusha (= double) gets the assignment to play the Lord for 3 years in order to keep the cohesion in the army. Kagemusha plays Shigen convincingly and leads numerous wars, but injures himself when he falls off a horse, thus the people discover he doesn't have the Lord's scar on his back. He gets expelled, but secretly joins his army in a fight and dies.

There's a thin line between demanding and boring - Akira Kurosawa managed in his Samurai epic "Kagemusha" to outweigh in the benefit of the first. That minimalistic film lasts for over 170 minutes of running time but it's easy to watch - even Hitchcock once said that it doesn't matter how long a story lasts as long as it intrigues you - and has a twisted story about a double of a Lord that gives it a dose of unusual spark. In the first scene, an 8 minutes long take, does the Lord asks himself if it's appropriate that he gets played by a thief, and among other impressive images are the one where a soldier cowered with mud is running pass the army that is asleep and the one where the double has a surreal dream where he meets his "original" Takeda in the clouds. A slightly overstretched, but still excellent film, rich with symbolic rhetoric about the search for identity and a place in the society, most obvious in the beautifully sad ending that lifts it up as a serious movie for grown ups that talks about some big issues in life. Kurosawa had great difficulties financing his films in his last phase of his life - he made only 8 films from '65 to '93 - but here he showed that he can adapt to the modern audience and make a valuable art film with vibrant colors. The movie won the Golden Palm in Cannes, was nominated for an Oscar and a Golden Globe as best foreign language film, while Akira Kurosawa actually won a BAFTA as best director, together with the art direction.
Grade:+++
Posted by Marin Mandir at 12:11 PM