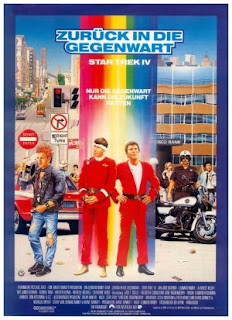 In the year 2286, an invincible alien probe shows up and puts the whole Earth in chaos, evaporating the oceans and ionizing the atmosphere. Admiral Kirk, Mr. Spock, Dr. McCoy and the rest of the Enterprise crew discover it can only be stopped if it gets a signal from whales. But since the whales have been extinct since the 21st century, they use the Klingon ship to make a circle around the Sun and travel back in time. They arrive at San Francisco in 1986 and walk around the streets, confused at all the primitive culture of Earth. Kirk manages to become friends with Dr. Gillian, a guide at a Cetacean Institute and persuades her to give him her whales. He takes her with her and they go back to the 23rd century, where the new whales stop the alien probe.

No matter what everyone says, this unusual nostalgic time travel sci-fi comedy with a sly ecological subtext is the best "Star Trek" film. Abjected by some fans due to its unorthodox story, it is probably the most enjoyable and 'universal' "Star Trek" film since everyone can "get it", even non fans, because its futuristic story has been placed into a recognizable context—it is a culture crash of cosmic proportions that works marvelously as a hilarious "fish out of water" story. After three dark films in a row, director Leonard Nimoy turned the tables and presented the audience with a surprisingly funny part 4: the beginning and the ending are typical run-of-the-mill "Star Trek", and the setting for it is awfully contrieved (why would an alien spaceship randomly destroy Earth if it cannot detect any whale sounds on it?), but the middle part where the whole crew travels back in time to San Francisco of 1986 is absolutely unbelievable, a riot that has our characters getting placed in weirdest situations that are irresistibly cute and are bound to cause a reaction from the audience, unlike some films that just leave you cold (Kirk wants to cross the street but is interrupted by an aggressive driver, thus uses the word "dumb ass" to "blend in" with the culture; Mr. Spock has a confrontation with a punker in the bus whom he immobilizes using his Vulcan technique; Kirk explains him that in this time everyone swears, and that evidence of that "can be found in all the literature of the period, like the neglected works of Jacqueline Susan and novels of Harold Robbins"...) while it is especially amusing when Mr. Chekhov accidentally gets mistaken for a spy on the army nuclear vessel. A naively-sweet light junction between different genres, and it seems the most intelligent in the whole series, that should enjoy cult status for its shrill mood.