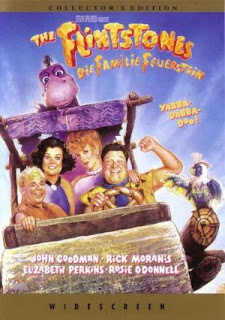 The Flintstones are a normal prehistoric family living in Bedrock. Thanks to Fred, Barney and Betty Rubble manage to adopt a baby, Bam-Bam. In order to show his gratitude, Barney switches his workers exam results with Fred's - as a consequence, Fred is promoted to the executive suite in the Slate company, while Barney is fired. At first, Fred enjoys his big salary, yet the sneaky manager Cliff and his secretary Sharon Stone set him up and blame him for firing all the workers. Still, thanks to the recording of the Dictabird, Fred is able to prove his innocence and get his old job back for inventing concrete.

The live action adaptation of the legendary Hanna-Barbera animated series "The Flintstones" is an amusing and sympathetic mainstream film that mostly managed to stay faithful to the innocent tone of the original, with John Goodman and Rick Moranis providing extraordinary performances that nailed down the cartoon characters of Fred Flintstone and Barney Rubble. For a fantasy story set in prehistoric times, the movie has a few neat satirical references: for instance, producer Spielberg's name has been "translated" into 'Spielrock', a park where people play in has been named 'Jurassic Park', while it's hard not to enjoy the words told by Wilma's mother: "You could have married the man who invented the wheel. Instead, you married the man who invented the excuse!" Still, even though Halle Berry plays well the secretary named Sharon Stone (!), her sex appeal seems out of place for such a story. Speaking of the story, it's very convulsive - it tried to make a satire of greedy corporations and Capitalism, yet it was obviously a too big bite to take since it completely lost the innocent, small everyday details from family life of the original show, which is why it's so heavy handed at times and why the second half of the film is worn out. It would have been better if the film stayed more faithful to the spirit of the cartoon, even though it's a very solid achievement.