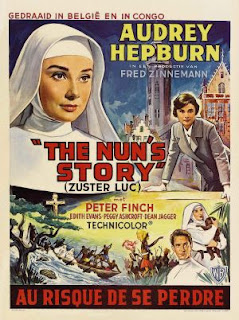 Gabrielle Van der Mal leaves her home and father in order to become a nun. In a convent, she discovers there are strict procedures to be followed, nobody can say anything and she even gets a new name: Sister Luke. Although her superior Mother Emmanuel recommends her to flunk the class for penance, she disobeys and passes, getting sent to Congo to nurture the sick. In a hospital for Europeans, she meets the atheist Dr. Fortunati and falls in love with him. He heals her from tuberculosis, but her new mission leads her to a Belgian city when the World War II starts. There she looses her faith and leaves.

"The Nun's Story" is a gentle and calm melodrama about faith whose best part is it's beginning. There the old master Fred Zinnemann and screenwriter Robert Anderson take a critical view on harsh traditions of the convent in which nuns can's talk and the sole notion of a sin is overstretched to such a measure that it even complies to trivial things, making them ashamed when they talk, when they are vain or proud. Zinnemann cleverly defines those rules as repression without resorting to blatant accusations, even though it's purpose is clearly questioned, while Audrey Hepburn is especially wonderful in sweet scenes where she hides her arms bellow her dress or when acts stoic while her long hair is cut. Some 85 minutes into the film, the effective Peter Finch shows up, but his romance with the heroine is bad since she is afraid to show her feelings, causing the structure to collapse, the supporting characters are uninteresting, the 3 hours of running time are overlong while some things are left unsaid, while on the other hand some things were left unsaid with a reason, since the story is an allegory about the difficult, fragile position of religion in modern life. Out of 8 Oscar nominations and 5 Golden Globe nominations, the movie failed to win even one, yet the wonderful Hepburn won a BAFTA as best actress.