The Castle of Cagliostro 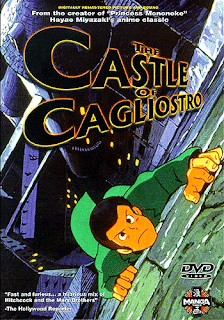 Master thief Lupin III and his colleague Daisuke Jigen manage to rob a casino and escape, but once in the car, they realize the entire stolen money is counterfeit, and therefore worthless. In order to discover the counterfeiters, the two of them drive with their car to the Duchy of Cagliostro, the smallest country of the UN. On the road, Lupin spots a girl, Clarissa, being chased by a group of criminals, and tries to save her, but unsuccessfully, since they are able to kidnap her. But Clarissa left Lupin a ring and he remembered that she is the princess who saved his life many years ago, so he decides to rescue her when he finds out the evil Count of Cagliostro is keeping her locked in his castle to forcefully marry her. Together with inspector Zenigata, Lupin rescues Clarissa and discovers the ancient town, while Cagliostro gets killed.

"The Castle of Cagliostro", the first feature length anime film directed by Hayao Miyazaki and the best achievement where the character Lupin III appeared in, is a thoroughbred example of a swashbuckling adventure with aesthetic explorer spirit and mood as well as a mild touch of fantasy. From the humorous exposition where Lupin is from his car throwing out bundles of worthless money on the road, up to the opulent Duchy of Cagliostro where the said hero saves princess Clarissa but becomes unconscious from the fall of the cliff, so she secretly gives him her enigmatic ring, Miyazaki displays a bravura elegant narration and simple mastership that combines fun, drama, adventure, archetype about heroes—the whole story is basically a knight saving a princess in distress—and opulent details (in one scene a Cagliostro soldier approaches his cigarette towards the laser movement detectors in the garden that active and light the cigarette). Although the eclectic finale is slightly unsatisfactory and the humor understated, "Cagliostro" remains a sparkling example of anime with all the future Miyazaki elements in raw models (for instance, Carissa looks almost exactly like "Nausicaa").