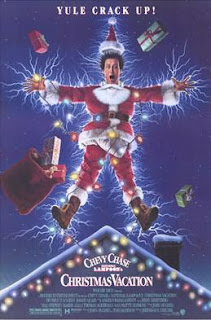 Clark Griswold and his family, wife Ellen and teenage kids Audrey and Rusty, and preparing for Christmas. They steal a tree from the forest but then their relatives come to visit of which the biggest annoyance is Eddie who lost his job and sends his kids from his trailer to the Griswold home. The turkey ends up becoming a weak feast while a squirrel enters their home and causes a commotion. But the biggest problem is that Clark's boss didn't send him the Christmas bonus - that causes Eddie to loose control and kidnap the boss. The police raids into the home but the boss forgives the Griswolds and promises a bonus. Everyone starts celebrating.

Chevy Chase, the icon of infantile American habits and cheap humor, seems as if he became a little bit indifferent towards his job repeating his Clark Griswold role for the third time, although he managed to deliver a solid performance. "Christmas Vacation" is considered by some to be the best among the National Lampoon Vacation film series, although it's not as hilarious and cynical - or good - as the first film, but it's still better than the barely watchable second and weak forth film. This third film has probably the fairest, most politically correct tone, tamer in this case since the story plays out during Christmas, and a proper structure, but at some moments it all became so gentle and watered down that it's mostly suited for those who love "sustained" kind of humor. Indeed, the film lacks real punchlines and great gags, and doesn't have much going for it except for the fact that it's always nicer to enjoy misadventures of a family during the humane mood of Christmas than on some other occasions. Interestingly, the actors of the Griswold kids were once again replaced, among them even with Juliette Lewis who made the best daughter Audrey ever, and a little jewel is Brian Doyle-Murray as Clark's boss who realizes he made a mistake as a greedy businessman and decided to embrace the Christmas spirit. "Christmas Vacation" is a nice little Christmas film, but can't really compete with those all time great Christmas films from the past.