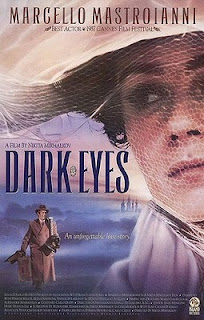 Pavel, a middle aged man from Russia, travels in an ocean liner. He enters an empty dining room and meets an older Italian gentleman, Romano, who tells him about his once-in-a-lifetime love story: 8 years ago, Romano was married to the rich Elisa even though he did not really love her. Upon visiting a spa, he met a naive Russian lady with a dog, Anna. They joked around until they landed in bed. She left to return to her husband, but Romano could not forget about her. Using a plan to build a glass factory in Russia as a pretext to travel around that country without surveillance, Romano met Anna again. They promised to divorce from each other partners to be together. But when Romano returned to Italy and found his wife in financial troubles, he stayed with her. Back in the present, Romano sets the tables, while Pavel calls his wife – it is Anna.

Shining romantic tragicomedy „Dark Eyes“ has been rightfully described by someone as a 'tragi-comic tour-de-force': the story is funny and full of humor, but the ending makes it one of the saddest movies of the 80s. It may seem cliched, but it really pays out to pay attention to some of the dialogues said throughout the film, since they all give another layer to the characters after the finale. But even without it, on their own, many have some universal wisdom in them: for instance when Romano (brilliant Marcello Mastroianni, who was nominated for an Oscar and won the best actor award at Cannes) finds out his companion Pavel was just recently married, he asks him a simple question: „Are you happy?“ And he simply says: „I'm happy“. The look on his face really gives it magic, because such a simple state was rarely so openly shown in films. Not to mention Pavel's powerful monologue about love: „This ship is going to rot, this Ocean is going to dry out, but the good things we did and the bad things we did will somehow link us forever.“

Director Nikita Mikhalkov shapes the story as a comedy most of the time, crafting it with life and elegant touch, while it is amazing how he manages to suddenly „splash“ the viewers with serious romance without ever losing his balance, even though the love story between two married people, Romano and Anna, arrives like an emotional tsunami. Most of the credit goes to the honest way the whole film has been made, which is why the touching scenes are never sentimental, but poetic: in one sequence placed roughly ¾ into the film, for instance, a count is talking to the protagonist in a Russian mansion, but Romano suddenly stops listening to him and his mind „slips away“, as he just stares at a globe in front of him and a cup of tea that is illuminated by the Sun. Suddenly a maid enters the room and the count starts an argument with her. Romano still does not register them, but cannot quite comprehend why. Until a dog enters the room, Anna's dog, making Romano realize he was sensing her presence all along. Just like in Mikhalkov's „Burnt by the Sun“, the viewers can already anticipate the ending already half way into the film, but when it unravels, it is still emotionally devastating anyway. The finale offers some of the deepest contemplations about life, love, destiny and happiness. Some wanted to change such an „unusual“ ending to make it more „complete“, but the way it is, it already said everything. You just have to think about it.