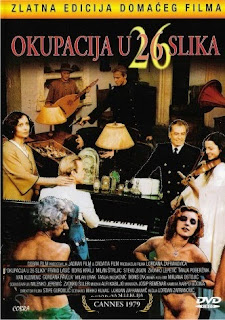 Dubrovnik on the eve of World War II. Croat Niko, Italian Toni and Jew Miho are best friends who spend their time joking around with a local prostitute or in fencing club. When the Italian and German Fascists enter and occupy the city, they establish the brutal Ustasha dictatorship, which tears the community: Toni becomes a fascist while Niko and his father Baldo become anti-Fascists and loyal Communist. When Baldo dies for acting in the resistance and Toni takes over his house, Niko shoots him. At the end, Niko and Miho leave the city and join the resistance.

Cult film "Occupation in 26 Pictures", nominated for the Golden Palm in Cannes back in those days, extremely polarized the opinions - most critics praised it during its premiere, though it had a lot of detractors, most notably Nenad Polimac, who famously called it "garbage" - which, combined with its controversial topic, placed it in a "bunker" in the 80s and 90s. The sole film is surprisingly good, though, and holds up well: it is stylistically pleasant, especially in visual sense when director Lordan Zafranovic manages in a few occasions to somehow blend in the shot composition with the beautiful-opulent architecture of Dubrovnik, as well as some inspirational sequences, like the elegant moment where two Nazi motorcycles swiftly enter the city and chase off pigeons from the street, with the SS Major taking photographs of the monuments, surprising a local man feeding the birds.

It is far less tedious than expected, with the latter showing up mostly in the last third, though the story is chaotic-aimless whereas some critiques of Fascists turned out blatant (decadence of the soldiers; the march of the Italians on the Dubrovnik street where at least a dozen of them slips due to Italian sand thrown on the ground; fascist supporters wear pale-white make up...). The best sequence of "26 Pictures" is surprisingly also the worst one: the fascist massacre of a dozen prisoners in the bus. The best because it almost reaches Hitchcock's caliber of suspense when a musician is playing cheerful music throughout the trip while the prisoners are observing the picturesque sight of Dubrovnik from the window, all the while the bus is driving them off to the wilderness, causing the feeling of uncertainty. But it is also worst because once the splatter violence starts, it turns into trash. Still, it presents some brave and noble messages about the cyclic reoccurring evil and its effects on people, promoting humanity and Bertoluccian expression, which is why it deserves to be seen despite some omissions.