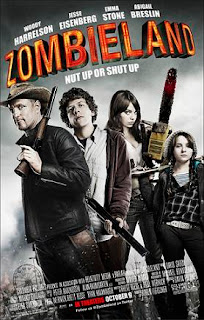 After a mysterious plague that led to a complete Zombie occupation of America, one of the rare survivors is a young lad, Columbus, who has his own set of rules. On his way to find a place without Zombies, he is picked up by Tallahassee in his car, who is searching for some Twinkies. They encounter Wichita and her little sister Little Rock, who double-cross them on several occasions, but still decide to keep together. They arrive in Hollywood and enter Bill Murray's mansion, but get surprised the actor is still alive there. Still, Columbus accidentally shoots him. Zombies attack the two girls in an amusement par, but Columbus and Tallahassee save them.

One of the few films that actually managed to avoid the trashy-gory essence of the Zombie genre to a certain extent, horror-comedy "Zombieland" by screenwriters Paul Wernick and Rhett Reese is a sympathetic and fun little film that even encompasses a few subtle messages about family. The opening act is not as inventive as some have pointed out, the finale is reduced to the dry "shoot-the Zombie" scheme whereas a few more instances of inspiration would have been welcomed, yet the story is consistently interesting thanks to the energy of the actors, especially the brilliant Woody Harrelson and Abigail Breslin. The best comic bit is when Tallahassee shoots a Zombie coming out of a store and asks Columbus: "What do you think? 'Zombie kill of the week'?" And Columbus disagrees, stating it was done by some sister Cynthia, where the film shows a flashback of an elderly lady going to the door while a Zombie is fiercely approaching her. She just rings the bell and a piano falls on the Zombie, squashing it. A genius idea. Yet the best part of the film is definitely the small cameo by Bill Murray who brings down the house: the four protagonists go to Los Angeles somewhere in the middle of the film and stumble upon the comedian, leading to the most surprising, wacky and unbelievable encounter seen lately: he is the only survivor in town because he had the wits to disguise himself as a Zombie to "blend in". Whoever managed to insert that idea is a genius, it's a pure delight.