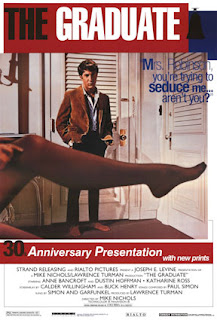 The 21-year old Benjamin Bradock has finished college with brilliance, so his rich parents organize a party in their home in Los Angeles. Despite all that, he evaluates his life as pointless and somnolent. After the party, he drives the older Mrs. Robinson, the wife of his father's friend, to her home where she tries to seduce him, but just then Mr. Robinson enters and Benjamin runs away. Still, he agrees to meet her in a hotel and there he looses his virginity with her. Their affair continues for months until Benjamin meets and falls in love with her daughter Elaine and decides to marry her. Elaine refuses when she finds out he slept with her mother, but just as she was about to marry someone else, Benjamin stops the wedding and the two of them leave in a bus.

There is one visually fascinating moment in "The Graduate" that makes such an impact that it has influence on the whole rest of the film. It's the sequence some 15 minutes into the film, when Mrs. Robinson suddenly enters the room with Benjamin in it and locks the door; but although she is naked, the camera shows just her face, while her intimate parts get almost imperceptibly flashed on the screen several times in just a few milliseconds (!) in front of the embarrassed face of the main hero, almost in playfully self-censored way, getting almost too fast to see. Although this fabulously intelligent masterpiece contains many moments that are funnier than some lowbrow comedy—even though it is actually a drama—exactly that hyper-dynamic sequence makes it very special and stimulative because it is at the same time inventive, groundbreaking, unusual, quirky—and laugh out loud funny.

"The Graduate" seems like some standard, conventional classic—but it is not. It is a very personal, genuine and touching film that many viewers can identify with since it contains a universal story about a young hero who is uncertain at what he wants to do with his life and future, and experiences his first love in a very unusual way, thereby opening several themes about the older generation (Mrs. Robinson) trying to control, take advantage of and subjugate the inexperienced younger generation, but the latter wants to live their life their own way, thus touching the nerve of its time. It is completely justified that the film was awarded with several prizes and established the genius actor Dustin Hoffman as one of the best American actors of the 20th century. The whole story is full with quirky and alive moments, from the strip bar scene where a woman is swinging "loops" attached to her breasts up to the moment where Benjamin gets thrown with a diving suit into the pool by his parents, symbolizing the generational gap and miscoprehension in the family and causing the "Time" magazine to place it together with "Rushmore" as the 10th most hydrophobic movie of all times. Although very simple and despite an overlong finale, humorous romance "The Graduate" is a shining achievement—and one of the purest examples of realization of true love caught on film.