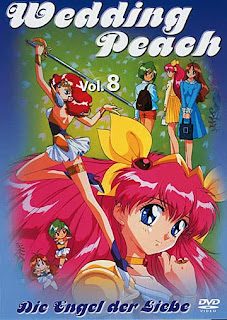 Momoko is a clumsy, pink haired 13-year old girl that likes to hang out with her friends Yuri and Hinagiku. But all three of them are in love with the same boy: the football leader Kazuya. One day Momoko gets attacked by a man who is a demon, but gets saved by an angel that gives her, and then even Yuri and Hinagiku, special powers to transform into Wedding Peach, Daisy and Lilly, in order to fight against the evil demons who posses humans. The main enemy is Devila of the devil world who wants to destroy love because she never experienced it herself and is angry at humans, as opposite to the angel world. Devila organizes troubles at weddings, football matches and in school. Momoko slowly falls in love in the arrogant Yousuke. When the trio gets joined by Angel Salvia they discover the angel is actually Kazuya and that Yousuke's dad was actually a demon. In the end, love conquers Yousuke, Momoko impresses Devila and she becomes good.

This successful anime series of the "Magical Girl" genre has a fine sense for rhythm, characters, songs, humor, emotions and nice dreamy-foggy background, but in the end it's a little bit too absurd, immature and kitschy for bigger ambitions. Indeed, already when you read the title, "Wedding Peach", it's hard not to chuckle. Not to mention other bizarre choices of the authors: Momoko's hair is pink. Hinagiku's is green. Angel Salvia's real name is Scarlet O'Hara. In order to transform to fight the evil demons, the girls firstly transform into a wedding dress costume - and then again into their "real" fight costume with shorter skirts. And the cute little, naive, fuzzy demon Jama-py that becomes their friend and serves a function of a pet later on in the show looks almost like Kirby. Still, this anime has it's virtues: naturally, in every episode the heroines always beat the evil, but the director Kunihiko Yuyama and his crew wisely chose that those duels shouldn't be the main attraction, since it's much more interesting to see the girls interact with each other like normal teenagers, mirroring a few very well written youth observations. As with most "Magical Girl" animes, "Wedding Peach" also introduces the fantasy aspects of the story as a symbolical commentary on the main protagonists reality, in this case the main heroine Momoko's obsession with weddings.
Momoko is a well developed character since she is at the same time persuasive and lazy, funny and sad, surrounded by friends and yet lonely, where her secret identity serves as a catalyst for her possibilities. Already in the first episode, in the sequence where the three girls share their ice creams in order for everyone to try out each other's flavor, is cute and insightful. Other highlights are Momoko's transformation under water, girls competing in cheering for a guy, the principal tripping on the stage and the students laughing, a demon that falls in love and a humorous moment where a baby says it's first words - Wedding Peach. The animation is good and consistent in almost every episode, even though it's obvious that some solutions were heavy handed and amateurish, while some cliches and illogical situations can't hide that it's actually a show with a lot of honesty, while the basic story about a devil and an angel world is simple yet clear. Of course, since among others Kotono Mitsuishi gave her voice to the character Potamos, it's hard not to compare this with it's forerunner "Sailor Moon". If at least there was one magnificent moment here, like the one in "Sailor Moon's" episode no. 151 in which a naked Ami is walking inside the painting of her father and talking to her alter ego Sailor Mercury or the one in season 5 where Seiya says to Usagi that he will take her into a dreamland, "Wedding Peach" would have deserved a higher grade.