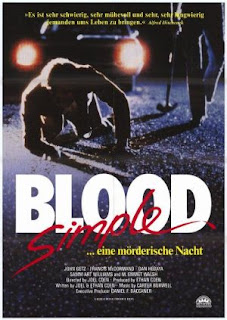 Marty, the owner of a bar in Texas, hires a private detective to eliminate his wife Abby as a punishment for sleeping with Ray, his employee. But the plans of the revengeful husband soon become a farce when the detective eliminates him instead, while the couple gets plagued by doubt and fear. But since the detective forgot his lighter at Marty's bar and (mistakenly) thinks that Ray has it, he shoots him in his apartment. But Abby mistakes the detective for Marty and shoots him.


"Blood Simple" is the directorial debut of the Coen brothers that immediately caught them on right foot and proved to be a great contribution in their full, thoroughbred crime element. In this shining cult achievement, one of the best films of the 80s, Joel and Ethan Coen faultlessly enjoy crafting a humorous noir film filled with irony and cynical touch, but such laughter can get stuck the viewer's throat - since it's always dreadfully realistic. The violence is so stylized that it's neither attractive nor repulsing, the style and the esoteric mood - created thanks to the play with shadows and dimmed lights - are perfect, and a fantastic fun, while the smooth surreal details just give another reason for pleasure. A rare jewel. Later on they tried to give even further contributions to the theme, but never somehow repeated the magic feeling of this grotesque. There is a whole bunch of creepy scenes: Ray (Getz) painstakingly buries the half-dead, half-alive owner of the bar, thus the soil above him still moves, in an expressionistic 15 minute sequence almost without any dialogues; in the suspenseful attempt of kidnapping the music becomes unbearably loud; Ray has an affair with the married Abby and her husband, Marty, calls him on the phone and asks him: "Are you having fun?". M. Emmet Walsh achieved the role of a lifetime as the sleazy detective Visser, who is one of the greatest cynical characters in cinema - almost every of his lines is a classic: in one particular, Visser presents to Marty the photo of his wife in bed, having an affair, and jokingly adds: "I know a place where you can get this framed!" It is amazing someone dared to finance this minimalistic independent film by the first time directors and then "nobodies", the Coens, but sometimes things just end up the way they should, since this overstretched, but delicious classic is simply meticulous.