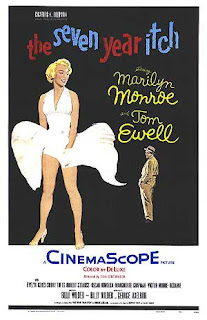 New York. Richard Sherman is a middle-aged publisher who sends his wife and his kid to a vacation in Maine over summer. But staying all alone, swayed by the heat, he spots the 22-year old blonde who rents an apartment upstairs. When her vase accidentally falls down on his chair, he invites her down to his apartment, but when he tries to kiss her he realizes he shouldn't be doing it and backs off. Still, he invites her to the cinema and offers her to stay over at his place, where there is air conditioning. The next morning, she tells him he is sweet and he runs off to bring his kid the paddle he forgot.

Who knows in what kind of a condition Billy Wilder was when he decided to direct this (erotic) comedy that daringly breaks loose the norms and morals of the tame 50s? He must have wanted to capture the suppressed lust of his society, because the whole story is quite simply, without a doubt, revolving around lust - it's not an accident that Marilyn Monroe shows up in one scene on the balcony, apparently nude, while the plants are cowering her intimate parts from the shoulders down, and mischievously says to the coiled hero: "I always put my undies in the icebox during the summer!" There is no doubt that Wilder is daring a lot in this film, and that's why it still looks undated, and the image of Monroe's dress getting blown up by the subway wave remained his most widely recognized icone, while even the coiled Tom Ewell seems all right, yet the caricature humor abandons his sophisticated sense for laughs and too many goofy fantasies of the main protagonist are rather misguided. As a result, either due to the screenplay holes or the conditions during shooting when the company wanted the story to be "more suitable for the audience", the interesting "7 Year Itch" just stopped at becoming a good film.