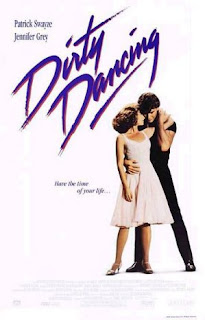 In the summer of '63, the 17-year old girl Baby is taking a vacation together with her parents, Jake and Marjorie, and sister Lisa at a turist resort equipped with dancing. The place is typical for family visits, pretty conservative, old fashioned and for young people boring. But Baby meets the young dance instructor Johnny and his dance partner Penny, who wants to make an abortion. In order for Penny to get some time off, Baby jumps in for her and dances with Johnny at the hotel ball. The abortion goes wrong and Baby's dad has to save Penny's life. Baby and Johnny start a relationship, even though he is poor. In the end, he gets fired, but they perform a great dance at the end.

Now it's obvious that the 1980's were a class for itself, an esoteric time period where events and situations in movies seemed somehow more stimulative than they are today. If "Dirty Dancing" was made today it would have probably been just another mediocre product, but since it was made in the 80s it's still a surprisingly charming, sympathetic, real, alive film filled with youth's energy that hits just the right nerve. The heavy handed "Romeo & Juliet" melodramatic complications sometimes seem as if they came from a soap opera and the one dimensional bad guys like Robbie don't improve the impression, yet all in all "Dancing" is a very fine film with wonderful aesthetic, even offering an interesting take on class differences. Especially great is the brilliant Jennifer Grey who after this film somehow sadly never achieved a great career, even though she is an incredibly charming actress, while one of the highlights is the enchanting, a truly natural montage where the main protagonist Baby is teaching how to dance with Johnny (in one scene he is rehersing a move of putting his hand down her armpit three time because she is tickled and laughs every time) and the song "Hungry Eyes" played during that sequence is perfect. Jennifer Grey, Patrick Swayze and the film itself as best motion picture - musical or comedy were nominated for a Golden Globe, while the song "(I've Had) The Time of My Life" even won the award.

I really admire Jennifer Grey's tribute to Patrick Swayze. She's doing Dancing with the Stars for him, class.