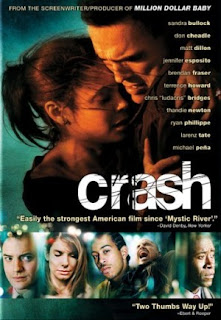 Christmas, Los Angeles. White District Attorney Rick and his wife Jean get robbed by two Black people, Anthony and Peter Waters, who steal their car...A Persian store owner gets robbed and decides to take revenge on Michael, a locksmith who repaired his door...Racist cop Ryan molest African American director Howard and his wife during a routine car control...Black detective Graham Waters investigates the murder of his brother Peter and has to take care of his sick mother...A Chinese woman gets involved in a car crash with the Ria, a Hispanic detective.

Some movies don't hold up well. Mosaic anthology drama "Crash" was surprisingly won several awards, including for best picture, beating the favorite "Brokeback Mountain". "Crash" might be more 'conservative' compared to the liberal "Mountain", but it's still superior nonetheless. Still, after frequent viewings, some of its flaws really start to become apparent. Poetic, touching, honest and slightly magical, this drama densely included the theme of racism in the function of the story, raising polemics about how violence only creates new violence due to banal misunderstanding of the hermetic individuals, enriching the whole with occasional esoteric scenes (the great opening credits with lights of cars shown out of focus; the finale with the snow in L.A.), with the unusual principle in which almost all of the characters change, hence the good ones become bad and the bad one become good.

Still, director and writer Paul Haggis made the mistake of redundancy: during the course of the film, it is shown how Black people are intolerant towards White people, White people towards Black people, Black people towards Chinese people, White people towards Hispanic people, Muslim people towards Hispanic people...People are racist, all right, we get the point, so why repeat the same motive again and again and again in all 10 stories? Why repeat the point when it was already said? Also, the messages are so blatantly obvious and the situations so contrived at moments it gets irritating. Out of numerous stories, the one revolving around the Korean couple is pointless, the one with Rick/ Jane and the Persian store owner underused, but the one with Matt Dillon's character, the racist cop Ryan, is simply excellent, culminating in the most persistent and beautiful sequence of the whole film: at first, he molested the African American Christine, but the next day, due to a strange twist of faith, he arrives at a car accident where he finds her stuck in the car. Even though she resists, he manages to save her before the car explodes, thus both sides somehow get close to each other and change in a strange way, in a shot so enchanting it deserves to get framed.