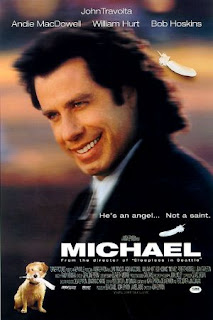 Frank, editor of the "National Mirror" magazine, gets a letter from an old lady who claims that an angel named Michael is living at her home. Since he is not in best relations with his boss Vartan, he leaves with his friend Huey, his dog and the peculiar Dorothy to visit that old lady. But there they discover that Michael seems just to be a normal man with wings and bad habits: he smokes, drinks, eats too much sugar and is messy. When the old lady dies and they return to Chicago with Michael, strange things start happening: he ends up as a wise person who helps them in trouble, changes them and brings Frank and Dorothy together. Then he dies.

A big box offcie gross ensured the mild fantasy comedy "Michael" enough attention. It would be wrong to say that the viewers were deceived and let down, but the movie is developing quite deifferently from their expectations, especially since the leading protagonist is not John Travolta, but actually William Hurt and Andie MacDowell. Not especially funny or strong, but somehow touching, kind and enigmatic, "Michael" honestly speaks about human emotons and mistakes, while some of the humorous moments involving "angel" Michael in his vice, like drinking or smoking, are pretty amusing. scenically and cute, this light film has a few clever moments and humane messages, Bob Hoskins is amusing as the "bad" boss, while the director Nora Ephron frames the whole story with the sky during the day in the beginning and the sky during dusk at the end of the film.