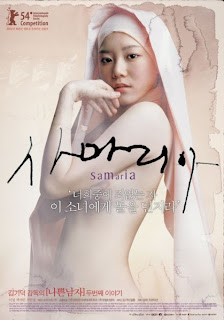 Yeo-jin and Jae-yeong are two teenage girls who want to earn money for a trip to Europe. In order to do so, Jae-yeong works as a prostitute, often talking about prostitute Vasumitra who converted every customer to Buddhism, while Yeo-jin sets her up with her clients and watches for the police. One day, the police raid the hotel and the ashamed Jae-yeong jumps through the window, injuring her head. Yeo-jin brings her to the hospital, where she tells her she wants to see one musician one last time before she dies. In order to bring him there, Yeo-jin agrees to sleep with him, but they arrive too late. Feeling remorse, Yeo-jin decides to sleep with all of Jae-yeong's clients and return their money. Her dad, a policeman, discovers this and confronts their clients. When he kills one of them, she takes her to a trip to nature.

"Samaria" is a sad, emotional and deeply melancholic allegory about sin and redemption, mixing obvious references of Christianity and Buddhism. The first part of the story, revolving around two teenage girls, one a prostitute and the other her 'manager', who want to earn money for a trip, is very measured and understated, while the second one seems like the inversion of that idea, where after one of them dies, the other one decides to throw away the materialism (money) and sleep with all the clients for free, in order to take her identity and investigate her life, thus turning into a 'Samaritan prostitute'. It's ambitious and very smoothly crafted, yet, sadly, the second half is really overstretched, sometimes melodramatically sluggish, sometimes painfully sad, thus in the end it seems the director Kim-ki Duk didn't manage to combine all of the symbols he put into a cohesive whole, like his magical, wonderfully spiritual previus film "Spring, Summer...".