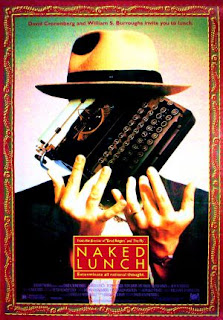 New York, 1 9 5 0s. William Lee works as an exterminator, but the powder he uses against the cockroaches is also used by his girlfriend Joan as a drug. Since William is himself an addict, he demands an appliance from Dr. Benaway in order to help him become "clean". Aiming at a cup on her head, William accidentally shoots and kills Joan and runs in the Interzone, a land created by hallucination. There he once again meets Joan and a typing machine that tells him what to write. He runs away with Joan to Annexia and once again kills her by accident.

In one "Simpsons'" episode, the boy Nelson and his friends go to the cinemas to secretly watch the cult film "Naked Lunch". After the screening, they get out, all confused, and say: "I can think of at least two things wrong with that title". Something like that could be used to describe this unusual, surreal film, an adaptation of William S. Burrough's "autobiographical" novel that "faithfully" portrays the hallucinogen state of drug addicts, but does not contain a single scene that could be described as virtuoso since it's more preoccupied with shallow fantasy images than with some deep storytelling. Many dark moments are full of imagination - Joan ate so much anti-bug powder that she even kills cockroaches with her breath; a lizard-man casually drinks in the bar; the Interzone that looks like some Arab city; a giant cockroach that talks; a penis that "grows out" of the typewriter - but Cronenberg still said that he would have needed a budget of 400 million $ in order to realize every detail from the book. The only thing he lacks is a point.

Oh, I liked this movie a lot, although I can see where you are going. Probably it's lack of a point is what kills it, but then again, can this also be attributed to the novel? I haven't readit, so I can't comment, but being aware of Burroughs' life, many scenes felt autobiographic, albeit in a bizarre way. Is the novel autobiographic too?

I also didn't read it. But I guess it was autobiographic in a lot of ways.