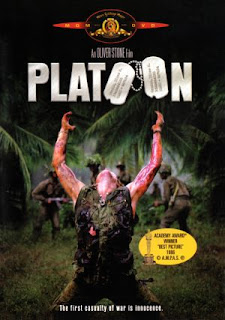 Student Chris Taylor voluntarily signs in as a sodier for the Vietnam War. Due to such decision, all other soldiers, who were forcefully drafted, mock him, ans he quickly figures why: there's real hell going on in the jungle. The worst in all the chaos is Sgt. Barnes who ruthlessly kills civilians and burns villages, for which he is heavily criticized by Sgt. Elias. Because of that, Barnes secretly kills him. After the bombardment of their position, Chris kills Barnes and as a wounded soldier returns home.

Oliver Stone, who in his projects often showed his hate and apathy towards the American politics, filmed with "Platoon" his own semi-autobiography of his events in the Vietnam war, which resulted in 4 Oscars (best picture, director, editing, sound) 2 BAFTA awards (best director, editing) and 3 Golden Globes (best motion picture - drama, director, supporting actor Tom Berenger). Like most war films that take a deeply raw and ferocious approach, "Platoon" was also well received for it's honest, realistic tone that doesn't embellish the events there, and war film fans mostly loved it since the story is filled with crazy details (Chris smokes "weed" through the barrel of a gun) and anxious portrait of some American soldiers killing Vietnamese mothers, raping girls and putting villages on fire. Stone tries to keep a moral balance by giving ethics to the main protagonist, and analytically displays a cold story, but most of the things shown in the film have already been shown before, from "Apocalypse" to "The Deer Hunter", while the director's mannerisms are sometimes annoying. It's a relatively powerful film, but somehow pale, deadpan, bland, usual and without care for the characters.