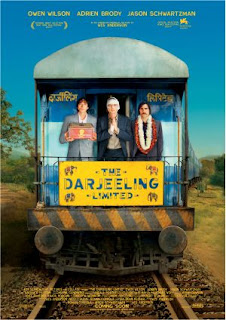 Hotel Chevalier: Jack Whitman is surprised when he gets a phone call from his ex-girlfriend who tells him she wants to know where his hotel room is. He gives it to her and they land in bed...Arriving in India, Jack meets up with his brothers Peter and Francis in the Darejeeling limited train, in order to go to a spiritual journey after their father died. Their train gets lost and they are thrown out for making trouble. They also spot a couple of kids drowning in river and try to save them, joining their mother in India.

Wes Anderson improved his style with "The Darjeeling Limited" considering smooth structure, but once again fell into the trap of a pale story with a "stranded whale" syndrome, since the start is great, but the ending runs out of steam. The film starts brilliantly, namely with the 13-minute short film "Hotel Chevalier" that was made for who knows what reason, but serves as a great forerunner to the main film: in the first scene, Jack (Schwartzman) is in his hotel room somewhere in Paris, ordering his meal in French, but then can't find a right word and asks in English: "How do you say 'grilled cheese'?", upon which the concierge tells it to him in French, which offers the typical Anderson absurd humor. It also features, for the very first time in any Anderson film, sexual activity, when Jack and his ex-girlfriend land in bed, and the melancholic song "Where Do You Go To (My Lovely)" is amazingly bitter-sweet, showing a surprisingly new, mature side of the director, who created his most realistic event yet.
The main film also starts off in high style: a businessman (Murray) runs in order to catch a train, but then he is outruned by another man, Peter (Brody) who manages to get in just in time, leaving him behind. Accompanied with some magical songs played during slow-motion scenes that send shivers down the spine, the film is at best when it plays out in the train, yet it's unexciting and too artificial to really go deeper in spirituality. Anderson has one of the best shot compositions in his generation of film directors, and some of his bizarre gags are great, like when Jack once again plays the song "Where Do You Go..." when the Indian waitress he has a crush on enters his compartment or when the three brothers are praying in a shrine, but all of a sudden Francis spots that Peter is wearing his belt and wants it back, making him really take it off in that unusual place, but the film once again annoyed a little bit with director's trademark caricature scenes, forced dialogues, pedantic-goofy humor and impartial finale. Anderson is a great director, but his stories are about nothing, just pale frames where situations occur and then sizzle off. Maybe it's time he made a story really about something, because his short "Hotel Chevalier" is perfect just because there is something exciting going on in it, and thus it's much more interesting than the vague spiritual wondering in India. In the end, it's another sweet, sympathetic little film from Anderson, whose 'tour de force' moment came in "Rushmore" and needs to be repeated again.