Revenge of the Pink Panther 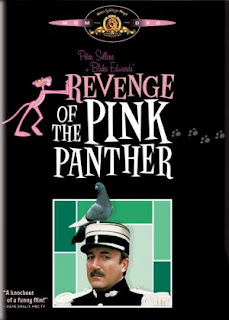 Drug dealer Philippe Douvier decides to eliminate Chief Inspector Clouseau in order to prove his power. His men throw a bomb into Clouseau's disguise shop, which blows up a whole block, but the Inspector survives. He then sends the assassin Mr. Chong, but Clouseau mistakes him for Cato and throws him out of the window. Finally, Clouseau goes with his car to a destination that was given to him, but the assassins just kill a transvestite who just stole the Inspector's car and clothes. Convinced Clouseau is dead, the authorities organize a large funeral while the former chief Dreyfus gets happily released from the mental asylum. But since Clouseau is still alive, he teams up with Cato and Douvier's secretary Simone in order to foil the mobster's plan in Hong Kong.

The fifth (if we don't count the unofficial '68 film "Inspector Clouseau") and last "Pink Panther" film in which Peter Sellers appeared in, 2 years before his death, is probably the weakest in the original series due to already seen and used sollutions which make the story drag, turning it even deeply predictable towards the end, but Blake Edwards' sense for slapstick comedy still compensates with a few good gags. Silly, goofy and dumb, this comedy offers a wide range of humor, from a scene where Clouseau mistakes an assassin for Cato and throws him out of the window, letting him spectaculary crash through walls, floors and tables, up to the one where the clumsy Inspector is arrested by the police for wearing a transvestite clothes and threatens a cop to release him or he will make sure that he will be sent to "work somewhere in Martinique", and on top of all, he even meets Hercule Poirot and starts and argument with him! The exaggerated humor uses the same old formula from the previous "Pink Panther" films and ends in a lame, but amusing manner, even though Edwards took the story of the first film in so different directions that it doesn't even resemble the original in the slightest bit anymore.