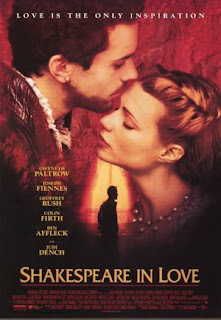 William Shakespeare (1564-1616) doesn't have any kind of inspiration for his new play and thus aimlessly wonders through London. During an audition for his play he meets the blond Viola, disguised as a man in order to get the part, and he falls in love with her. He changes his play from a comedy "Romeo and Ethel" into tragedy "Romeo and Juliet" that mirrors their relationship because she is engaged to the Lord of Wessex. On the stage, Shakespeare and Viola play the title heroes and get rewarded with applause from the audience, but due to Viola's engagement that was blessed by the Queen, she leaves him and sets for America.

"Shakespeare in Love" is an unusual experience. On one hand, it has a dumb start, it is silly and goofy at moments (a young boy fascinated by violence is revealed to be John Webster; Shakespeare disguises himself as a maid to follow Viola and Wessex) and is not especially funny since it reaches for caricature humor quite often, but on the other hand it has style, is very well written, played and directed, and sometimes it even reaches the emotional highlights of cinema, especially towards the tragic, esoteric end with a lot of pathos. The quirky concept once again uses the old "the unknown inspire the big" formula, in this case how the unkown Viola (excellent Gwyneth Paltrow) inspired the famous poet William Shakespeare to write his "Romeo and Juliet", and even though it is a costume film the characters and the settings of the 16th Century were made to resemble our modern times: Shakespeare goes to see a psychiatrist, the theater is presented like a (movie) showbusiness and even boat paddlers try to shove him their screenplays; in one sequence a maid sitts on a rocking chair in order to create squicking sounds that will "hide" the sounds of Viola and the title hero in bed. It is a quality made film, maybe without enough energy and focus, but cleverly made and with a hidden notion of mocking the "dusty" dialogues of those times - but winning an Oscar for best picture in 1998 is quite simply demagogy since "Saving Private Ryan", "Happiness" and "The Truman Show" were easily superior films.