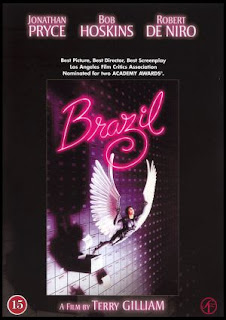 Christmas, some dictatorship country in the future: an explosion set by terrorists destroys a TV store. An official kills a fly that falls into the typewriter, causing an error that misspells Mr. Buttle as a terrorist, instead of Mr. Tuttle. The innocent Tuttle gets arrested and killed, while his neighbor Jill wants to find the people responsible behind that mistake. Meanwhile, Sam Lowry is an employee in the information section who also spots the mistake while the real Tuttle enters his apartment and repairs his ventilation. Sam falls in love with Jill and runs away with her in a truck, but they get caught by the government. Jill gets killed while Sam gets summoned to a torture chamber. In his dreams, he imagines he is still with Jill before he loses his mind.

Nominated for an Oscar for best screenplay and art direction, "Brazil" is an extremely stylish ode to Orwell's classic book "Nineteen Eighty-Four", actually a better "adaptation" than the Michael Radford's film with the same title released the same year, a bizarre Sci-Fi satire that shows the director Terry Gilliam's frustration with the mad, bureaucratic system he is living in. Actually, even though not many managed to get it back in 1985, the film "matured" very well and is now a cult satire among the films that ridicule totalitarian societies, and almost all roles are placed very well, from the hero Jonathan Pryce, Bob Hoskins as the repair man and Robert De Niro as the repair man in rebellion. The characters are slightly marginalized, but some scenes are brilliantly weird; Sam lifting a man from his wheelchair so that he can urinate; a dreamy sequence of a liberating angel who observes how buildings are rising up from the ground; a TV announcer commenting the success of terrorists with: "Beginner's luck". This is a fascinatingly different film with all of director's trademarks ('daft' set design, dark humor, grotesque-felliniesque characters, extravagant visual style, oppression), easily one of two or three Gilliam's finest films, but it is so hermetic, cold and messy, with an interesting open ending that's not for everyone, thus the term "classic" is disputable, even though everything is logical and radiates with hidden messages about lost humanity in a cold world.