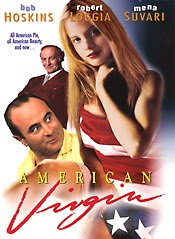 Terrifingly wrong and cynically immoral comedy that would like to be a satire, "American Virgin" is a real mess of a film where everything that could go wrong really did went wrong. Instead of a satirical take on porn industry and the private lives of people who work there, the awful screenplay takes the most cheapest means of low humor and shameless stupidity that absolutely kills everything that could have been made out of that subject, like let's say the excellent "Boogie Nights" showed, and it's really sad watching Bob Hoskins appear in a humiliating role of a middle-aged porn producer who is now impotent, especially when director Jean-Pierre Marois uses grotesque camera angles and takes an inhumane approach. Already in the first few minutes of the film the viewers will be surprised at it and rightfully ask: "What were they thinking?" due to amateurish execution that makes the whole thing even worse, while the open ending is madness. Mena Suvari bravely tackles her undignified role, and some of the gags are so weird they are actually funny, but this distorted movie is unbearable due to how tasteless everything is - causing any kind of reaction from the viewer may not be a good thing, especially if that reaction is just plain negative awe.