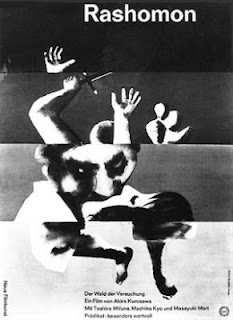 Japan, 12th century. Three strangers hide in an abandoned building during the rain. In order to pass time, one of them, the woodcutter, mentions how he found the corpse of a samurai in the forest and contacted the police, thus the perpetrator, bandit Tajomaru, was quickly arrested. However, there are three version of what actually happened: Tajomaru said he tied the samurai and raped his woman, but she insisted that one of them must die or she will live in shame. Tajomaru killed the samurai in the fight, while the wife escaped. The wife, however, testified that she only passed out and didn't know what happened afterwards. A 'medium' gives another take on it, allegedly channelling samurai's ghost: the samurai committed suicide because the wife wanted to run away with Tajomaru. Finally, the woodcutter gives a fourth version, which he withheld up until now: the wife called them both weaklings and incited them to a fight. The event is dropped when the strangers find an abandoned baby.

One of Akira Kurosawa's most famous and respected films, a one that helped put Japan's cinema on the map, "Rashomon" is a cozily set investigative, almost detective like contemplation about a crime event that has three (and later on even a fourth) versions, thereby turning into an exciting allegory about the relativity of truth, memory and even the origin of propaganda - in the end, who is to say that even the whole history of human kind isn't fabricated? By showing the three strangers trying to reach a consensus about the disputed event, Kurosawa crafts an elegant art-film, even showing some "inner-directorial" and metafilm touches by directing each of the four version with a slightly different movie style (the bandit's story is naturalistic, the wife's pompous and theatrical), implying how each of the narrators "audits" and "polishes" the story to suit his/her own interest, therefore even sending the message of the impossibility of people to stay neutral in events they are themselves involved and the multitude of perspectives. The meticulous efforts of the three strangers in trying to decipher the puzzle of the mosaic even tackles the theme of gnoseology, i.e. the limits of human knowledge. Excluding the too slow pace of the last version of the story and the pathetic finale with the baby, "Rashomon" assured itself a rightfully high status in the history of cinema and influence on other movies ("Memento", "Lola rennt", "Wild Things"...), showing a simple concept (the whole film plays out basically on only two locations) that turned more engaging thanks to the unusual narrative, and even announcing the modern style of cinema.