His and Her Circumstances 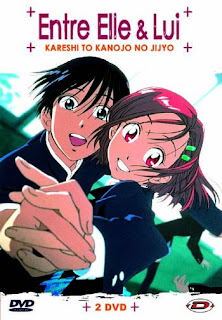 Yukino Miyazawa is a high school student: she is very popular there since she is attractive, helpful and always no. 1 among the exam scores. And therefor she sadistically enjoys praise from everyone and cherishes her ego. But at home she is almost unrecognizable since she wears glasses and an ugly jogging suit, forcing even her little sisters to keep that a secret. But one day a new students shows up, Arima, who takes her popularity away, causing her to study even more to return back to the first place. After he accidentally "catches" her in her ugly appearance, she accepts to do chores for him in order to keep that a secret, but soon he becomes her friend and they fall in love. Many other students, like Maho and Tsubasa, try to sabotage their relationship, but without success.

Contrary to popular belief, some of the best romantic stories can be found in anime and "Kare Kano" is one of the reasons for that. It sounds unbelievable that director Hideaki Anno, the author of the claustrophobic anime "Shin Seiki Evangelion", directed this wonderfully optimistic and cheerful series, a small recommendation, thus at some moments topping even himself as an author. The teenage heroine Yukino Miyazawa is an excellent character because she has a "perfection complex" and only considers a day successful if someone gives her praise: in the exposition, she is seen in top notch appearance with a subtitle saying "Miyazawa". While she is hearing the praise from her colleagues, under her face subtitles saying "He, he, he..." show up and then a caricature of her as a giant in front of the mass of fans, following with her lines: "I love to be adored! Everyone *has* to adore me! I am the queen of vanity". Truly, rarely has there ever been a better allegory of a person's self-fascination. And to top all this, a few scenes later she is shown at her home all messy, with an ugly jogging suit and glasses, with subtitles saying: "Miyazawa (the same person)". A hilarious contrast and masterfully placed message that says absolutely everything there is to say about such people in just a few unobtrusive scenes.

Still, in Anno's hands, Miyazawa always remained a positive and sympathetic character, maybe precisely because he enjoyed in portraying her as an imperfect person who strives to become something more than she is, especially since the story changes with time. The iteration of absurd continues well into later episodes (Miyazawa says she likes classic music but her "ghost" appears and admits to the audience that she just says that to pretend to be an intellectual; angry girl Tsubasa figuratively kicks a car 10 feet in the air with her foot; in episode 19 student Fukada was implanted with the photo realistic head shot of the animator of the show Kazuhiro Takamura!) and Anno's genius can be sensed up until the point where it is clear he left the show and was replaced with the weaker director Kazuya Tsurumaki who included poor animation and ruined the last 7-8 episodes with awful, unnecessary, exhausting subplots, infamous "recap" episodes and an unfinished ending that left a great deal of the finale of the manga out of the picture, which is a real pity after a fantastic start. The recap segments started consuming more and more time, until practically whole episodes were consisting out of them. Still, the gentle magical sequence showing intercourse between Arima and Miyazawa with "glowing" drops in the dark that unite and ignite, demonstrates his virtuoso touch. Rarely was truth so miraculously bizarre and precisely that's why this twisted romance is so special. Despite a terribly incomplete (missing) ending, humorous anime romance "Kare Kano" is great sporadically, but one cannot shake away the feeling that they missed a golden opportunity to make an entirely great series with only 12 episodes, instead of overstretching it into semi-greatness with 26 episodes.