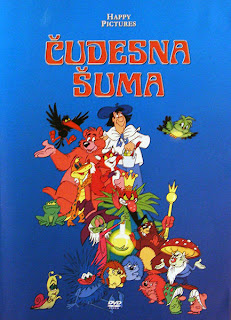 The evil Cactus king banished all beavers from the forest because he hates them. But one day a happy painter arrives in the forest and falls asleep under a magic tree that grants him the ability to speak with animals. He meets bear Mate, fox Lili with a French accent, three hedgehogs and the least beaver, making their portraits. But the Cactus king is afraid of the legend about a human that will end his tyranny so he organizes fires and floods in the forest, but the painter saves it with his magic paintbrush. The beaver also saves the green little Wizard Štapić from the Cactus king and makes a magic potion with him. The painter gives the Cactus king the potion and transforms him into a good person whose flowers bloom. Then the painter leaves the forest.

As much as "The Elm-Chanted Forest" comes off occasionally as an unusual, clumsy and eclectic achievement, so much it's at the same time hard to shake off the subconscious impression that it's a matter of a hidden jewel that truly deserves it's cult status on the territory of former Yugoslavia. The whole story unfolds in the mystical forest and offers hidden messages about ecological conscious, critique of dictatorships and friendship between different cultures. Though it's a children's film with sweet animation, some moments are truly magical and send shivers down the spine: in the exposition, the painter falls asleep under a magical tree, from which a green hand emerges and touches him, giving him magical powers, in a fantastic esoteric moment. At the same time, the authors fill it with neat humor: the painter opens the door but the knock turns out to be a woodpecker who plucks the wood, while the Aquarius creature dreams of flying above his home, while the animation if fabulous. Though the structure is rather messy, it's hard to deny the skill of the directors: the suspenseful sequence where the mole and the beaver rescue the little Wizard from his dungeon before the arrival of the evil giant robot is virtuoso crafted. The naive touch may not be for everyone, but the story still has charm - just like Disney's "Snow White", this film isn't ashamed of emotions either, and as a matter of fact, the ending is one of the most heart breaking and emotionally devastating moments of 80s animation.

It's quite a good film as I recall, and certainly was a pretty tear-jerking ending indeed.

Blažeković made just one more animated film, "Lapitch" (also known as "Hlapić"). I'm surprised that, as of today, they still didn't give him a free hand to make the animated version of "Tales of Long Ago", I would have certainly loved to see that.