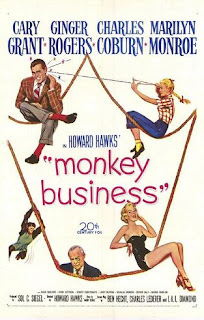 Coiled Dr. Barnaby Fulton is trying to develop an elixir of youth in his laboratory, under pressure from his boss Oxly. One of his chimpanzees pours some chemicals into the water cooler, accidentally assembling the potion, which Barnaby drinks in the water after he drank his own potion. He suddenly starts feeling young, his vision improves and he thinks he found the formula, unaware that it was made by the chimpanzee. He buys a car and takes the blond secretary Laurel for a grand day out in the public bath. Then he becomes his old self so his wife Edwina drinks the potion to test it out, also feeling young again, but starting a fight with him. Accidentally, they both drink the water with the potion and go wild, much to Oxly's discomfort who wanted to find out the formula. In the end, Barnaby finds out only the chimpanzee knows the formula.

It seems the title "Monkey Business" wasn't a good omen neither for the Marx brothers in their '31 film nor for Howard Hawks in this 1952 film, even though the famous director managed to present a neat humorous version of "Dr. Jekyll and Mr. Hyde" revolving around an uptight doctor who drinks a youth potion and loosens up years before Lewis' "The Nutty Professor". Forced and vague, this film isn't funny and fails to develop it's concept in a satisfying way, stopping only at becoming a solid achievement which is slightly disappointing for the famous director. The first time Dr. Barnaby drinks the potion and becomes wild and energetic is the best contribution to the story, also because of the chemistry between Cary Grant and Marilyn Monroe, who plays his secretary he takes out for a grand day out, but sadly that part lasts for only 5 minutes before Monroe is replaced with Ginger Rogers, who plays Barnaby's wife Edwina, who simply doesn't have the equal chemistry, and frankly her role is slightly annoying. The whole part where Edwina drinks the potion is pale, but even worse is the finale where she and Barnaby drink the potion together and act simply too childish, resulting in the embarrassing sequence where Grant's face is cowered with red paint and he talks some random kids into playing Indians with him in order to capture his rival Hank, which is rather unworthy for a star of his caliber.