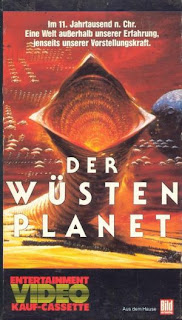 In the year 10,191, Princess Irulan explains that the most important substance in the Universe is Spice, which can enable travel through space, but can only be found on the desert planet Arrakis, called Dune. The Space Guilds sends a Navigator to the Emperor who explains him that he plans to destroy the increasingly popular House Atreides. When the Atreides and their servants come to Dune, the evil Vladimir from the House of Harkonnen kills Duke Leto, while his son Paul and his mother Jessica are able to escape an hide in the desert. They join the Fremen tribe. Paul marries Chani and teaches them his special fighting techniques. With the help of giant sand worms, they start a rebellion, kill Vladimir and place Paul as the new Emperor. Then it starts to rain.

One can hardly blame director David Lynch for not managing to make a worthy adaptation of Frank Herbert's cult novel "Dune" since he gave it his best attempt, but the restraints of the producers simply butchered it into an chaotic movie, yet what else can one expect when they stubbornly wanted to shorten everything, reducing a 500 page book into just a 2 hour film. Ironically, even though "Dune" is Lynch's most commercially successful film, it's also his biggest failure, since it grossed 27 million $ compared to a 40 million $ budget. A lot of costume and set-design solutions in the film are amazing, the special effects are unbelievable, but except for a few aesthetic images of desert and giant sand worms, there is little that will hold the attention of the viewers because the film is a stiff and too schematic adaptation, simply too incoherent since it introduces a whole bunch of characters that already die just 5 minutes later - frankly, those who didn't read the novel will even have problems following the story - with a lot of unnecessary grotesque ideas, like the fact that the bad guy Baron Vladimir Harkonnen has hideous pustules on his skin (even though he doesn't have in the book), in one scene floating away from his chair, then coming down, attacking a servant and drinking his blood (?!). The whole film is sadly rushed and too grey, but here and there an excellent scene appears, like Paul's hallucinations after he drank the Water of Life, showing how Lynch still has talent and admiration for such stories, which is why he refused to direct "The Return of the Jedi".