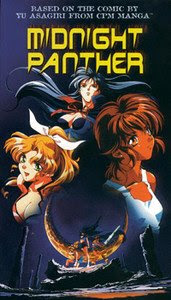 Somewhere in some alternate medieval world, there live three girls: Lou, Kei and Sonya. During night, Kei transforms into a panther and kills two con men who were passing by. The red haired Lou slays dragons in order to make medicine out of them. The dark haired Sonya chokes a peasant to death during intercourse. They work for an old lady and hide as entertainers in a circus. Their new assignment is to finish off the evil king Bado which seems like an act of fate since Lou is his sister, while the old lady adopted her when she was banished away. The girls enter the castle in order to entertain the inhabitants, but then Bado dies while sleeping with Lou who put poison on her skin. The girls then leave.