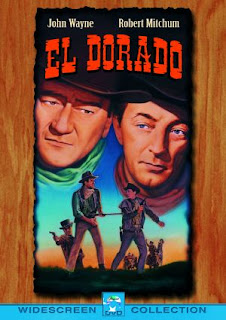 Sheriff Harrah is disturbed when he spots his friend Cole Thornton in town El Dorado is hired by the outlaw Jason. When he tells him Jason is evil and plans to push out farmer MacDonald from his land, Thornton steps on Harrah's side. Accidentally, while taking a walk, Thornton kills MacDonald's son who shot at him thinking he is the enemy. Josephine, the sister of the killed, in revenge shoots a bullet in Thornton's back. Months later: Thornton meets the young Mississippi in a bar, who only has a knife because he can't shoot. Returning to El Dorado, he finds Harrah drunk and Jason active. When the three of them unite and finally arrest Jason, they have to stay in the prison due to outlaw siege, but still manage to kill the criminal band.

In his penultimate film, "El Dorado", Howard Hawks shot a loose remake of his own film "Rio Bravo", but not with an equal fun result. The most interesting thing is how Hawks completely demolished the myths and cliches of the heroes: John Wayne, in his 142nd film, plays cowboy Thornton whose hand is periodically paralysed due to a bullet in his back; Robert Mitchum a drunk sheriff; whereas James Caan a young cowboy who can't aim. Obviously, the story has a lot of humorous moments - Wayne is arguing with Mitchum ("I was ordered to finish you off. Not that I couldn't...but I won't"), when he tells his name nobody even tries to draw a gun and in the scene where the criminal gang is in front of him he makes his horse walk backwards. The story is in the beginning slightly unfocused and derivative, not as playful as it could have been, but wonderfully relaxed, gaining rhythm with neat action sequences, like when the bad guys are on the church tower so the old man shoots at the bell in order to confuse them. Hawks' motto about what it takes to make a great film - "Three good scenes, no bad scenes" - stands, but here it's more like "Three moderately good scenes, no bad scenes".