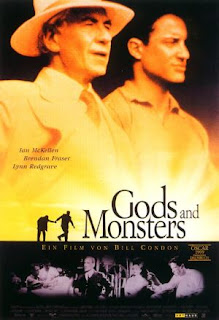 In '57, the young gardener Clay Boone wakes up in his trailer and goes to work at the estate of director James Whale, old but still famous author of "Frankenstein". Whale's housekeeper is Hanna who hides his big secret: he is gay. Thus, returning from the hospital, the lonely Whale starts seducing Clay advising him to take his clothes off while he takes pictures of him, telling him how his father banned him from school when he was 14 in order to find him work in a factory and how he saw terrible things in World War I. The two of them become friends, but Clay brags about his famous friend. After he returns from a party, Whale persuades him to strip naked and put a gas mask on, but the whole thing end in an argument. The next morning Whale is found dead in the pool. Clay tells his kid about his films.

Good and properly made biopic drama gains the biggest complaints from the lack of experience and the too narrow frame to be considered versatile in describing the final days of director James Whale and his secret gay affinity from which he suffered from depression and loneliness. Still, "Gods and Monsters" is a well made film of calm and steady directorial hand that won an Oscar for best adapted screenplay (while Ian McKellen and Lynn Redgrave were nominated as best actors) and a Golden Globe for best supporting actress Lynn Redgrave. It's impressive how the historic atmosphere was elegantly recreated, while the best moments are the surprising humorous scenes of the old filmmaker imagining how to scare his housekeeper. A mild, sufficiently interesting and simple ode to a forgotten person, while McKellen is great in recreating him in the leading role.