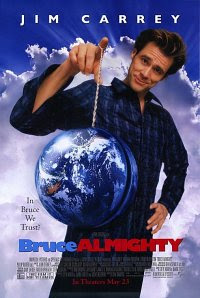 Bruce Nolan is a TV reporter who makes small news for a local TV station in Buffalo, New York. After a horrible day, in which he got fired and had an argument with his girlfriend Grace, Bruce in anger announces how it's all because God isn't doing his job. But then God shows up himself and gives him all his powers to try out doing his job. At first, Bruce is overwhelmed and uses his powers in order to become a popular anchorman, but then the town falls into chaos so he begs God to take over the lead again.

Some people watch movies in order to discover universal and higher truths about life. Those would maybe enjoy in those issues presented in the light comedy "Bruce Almighty", a messy and lumpily but sympathetic mild farce that has spirit and nice messages, some of them even with a sharp edge. The exposition in which Bruce is making a TV report is very funny (in slow motion, he is running with a bucket of milk and spills it all over the cups of children who stand in a long queue) but the movie steals a lot of motives from the masterwork "Groundhog Day" and even from many Capra classics. The esoteric plot in which Bruce gets the opportunity to take over God's job is executed at moments irresistibly charming, somewhere on the brink between Monty Pythons and Wilder (like in the scene where Bruce organizes a romantic dinner for Grace so he brings the Moon nearer and puts more starts in the sky) while Jim Carrey is tolerable. The impression is spoiled by the overstretched finale and "plot devices" that predictably always go more in hand towards the perfect God and much less towards the sympathetically imperfect human hero who could have improved the flawed world. Steve Carell steals by the way every scene from Carrey with ease, especially in the hilarious moment where his character is "messed up" by Bruce's powers while going live on TV.