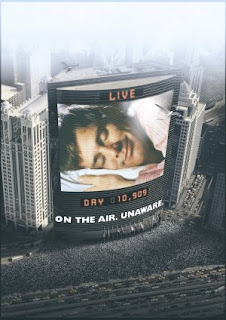 24 hours a day, 7 days a week, 30 years in a lifetime: those are the dates for the ultimate and most popular documentary channel in the world: "The Truman Show". For over 10,909 days over 1.7 billion people around the world turn on their TV sets anytime they want to watch the life of insurance salesman Truman Burbank. The only catch—Truman is completely unaware of that. Slightly passively, the sympathetic Truman lives his ordinary life with fake wife Meryl and fake friend Marlon, until he starts questioning his world. When he finally arrives at the end of his fake set on the sea, the author of the show, Christof, tries to stop him. But Truman exits anyway.

Here and there a movie shows up that contains such a sensationally original plot that it blows your mind. From the scenes where the viewers have photos of Truman on their walls instead of their own life up to the camera in a button, the screenwriter Andrew Niccol had an idea that's as genius as it is simple—what if a normal man would find out that his whole private life is just a TV show that was aired publicly all around the world? Unbelievably brilliant for its time, predicting the arrival of voyeuristic reality shows like "Big Brother", "The Truman Show" quickly entered the anthology of big budget Hollywood experimental films, and despite its commercial success the critics suddenly looked at comedian Jim Carrey in a different light for embodying the innocent, sympathetic title character without privacy. It's a beautiful example how the authors crafted a magical mood (the original screenplay, set in New York, was even darker, with a fascinating "meeting" of actors of the show and Christof), also thanks to the emotional engagement by director Peter Weir who used unusual camera angles and wide lenses to create the feeling of thousands of secret cameras in that show, achieving a career zenith. Niccol evoked the Greek mythology, by turning the ordinary story of an insurance salesman who cannot leave his town to find the girl he loves into an extraordinary, subconscious allegory about people battling the gods of destiny, the modern Moirai, who want to stop their wishes and dictate their life.

Bizarre and close at the same time: it is simply remarkable how Truman's ordinary little life can have such an importance, such a preciousness to the whole world. And it also speaks volumes about manipulation and classical conditioning used to instill a water-phobia into Truman in order to permanently keep him on the island. Still, it is a pity that the first half, which just follows Truman's routines in life, becomes rather tiresome after a while, since the second half that shows how the crew operates the show is much more fascinating, but rather too sparse. And there will always be numerous thoughts about some unused opportunities, like what would happen if Truman became a criminal? Likewise, it is a shame that not much from Truman's intimacy was shown—like taking a bath or being intimate with his wife—since it is essential and logical for such a theme. Among the unforgettable esoteric scenes is also the one where, due to technology, the fake Sun rises in the middle of the night, the visual style is virtuoso set up, the writing is unique ("He has the world's most recognizable face. He can't just disappear.") and the score is magical. Ed Harris is brilliant as the show's "creator" Christof—who is, fascinatingly, both evil (for deceiving and "imprisoning" Truman all his life) and good at the same time (for protecting his "star" from the "sick outside world", supplying him with friends, a dream job, family and not allowing bad things to happen)—the final dialogue between Truman and Christof is one of the great moments of the 90s, with the images evoking the Flammarion engraving, while the authors achieved a shining film.

I think this is the best film done by Jim Carrey, although I still haven't seen "Eternal Sunshine"... would you recommend it?

"Eternal Sunshine" is a mixed bag for my taste. The start and end ending were brilliant, the plot is brilliant, but the middle part was really going on my nerves.

By the way, I also think this is the best Jim Carrey movie.