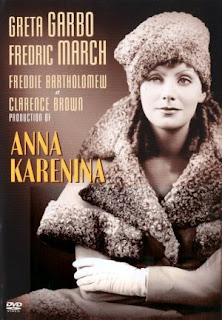 19th Century. After a big celebration, Count Vronsky goes to the railway station to pick up his mother. But Anna Karenina also exits the train and he instantly falls in love with her. She is the sister of his friend Stiva, but also the wife of Mr. Karenin. Kitty on the other hand is in love with Vronsky, but when she realizes her relationship has no future, she marries Levin. Anna and Vronsky start a secret affair, which angers her husband. She leaves him and her son Sergei and travels with Vronsky through Europe. Their love starts to become pale so she goes to visit Sergei on his birthday, which surprises him since he got the information she was dead. Vronsky goes to fight in the war so Anna throws herself under a train.

Quality drama "Anna Karennina" is an eloquent and compact adaptation of Leo Tolstoy's novel with the same title, reducing a 800 page book into a 90 minute film. Even though such a drastic reduction and lack of regressions may anger many literature lovers of the original (for instance, the love couple Kitty and Levin were not just vague episodic characters and some parts of the novel could have been a story for itself, like Nikolai on his deathbed) but as a whole the story works and manages to shorten the long story to the essential. Clarence Brown directs the film smoothly, with a few amusing scenes (like the scene where the soldiers constantly drink 3 glasses, childishly crawl under the table only to return and repeat the whole act again and again, while becoming increasingly drunk) whereas some dialogues are shrill ("The people are angry because I have two faces. But I need them in life!" - "But I thought you loved Mr. Karenin!" - "Only with my other face") and the romantic touch neat, while the main virtue is the performance of legendary Greta Garbo, who actually won a New York Film Critics Circle Award as best actress.