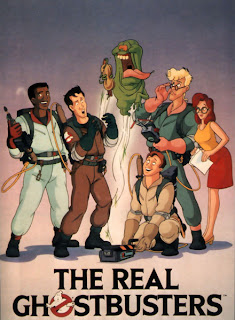 Peter, Winston, Egon and Ray are Ghostbusters, a group of ghost exterminators in New York. Ironically, green ghost Slimer helps them in their job in their building, where secretary Jeannine also works. The ghosts appear everywhere; in the sewer, apartments, woods and even in Transylvania. Among them are also the Bogeyman, the ghost of Sherlock Holmes, Dracula, the Marshmallow man, a cat that makes the wishes come true etc.

2 years after the hit comedy "Ghostbusters", the animated series with the same title was made for which many expected to be only a show for kids, but were dead wrong: not only does the series have a very claustrophobic, dark tone (it's the only "children's" TV show that borrowed from the literature by H.P. Lovecraft and managed to get away with it) but it's also more imaginative than the original film itself. The authors are full of irony, and thus some of their ideas, like the one that the whole Eiffel Tower is actually a giant ghost trap, are genius. The Ghostbusters go through various adventures: they do a job in a space station at zero gravity; go to Transylvania; get a car with a drawn Samurai sword in Tokyo whereas especially brilliant is the episode where they decide to sue a studio for making a movie about them ("Aykroyd, Murray, Ramis...I don't like this list of actors!", says one of them slyly), that even shows the live action opening scene from that film.

Even the sight gags are clever, like in the episode "No One Comes to Lupusville" where Ray is seen sleeping in his bed with a stuffed toy of the Stay Puft Marshmellow Man (!) and a tombstone clearly says "CASIO". The writers had inspiration and all did a great job in the first 3 seasons, which is why it is difficult to pin down the best, but J. Michael Straczynski and David Gerrold would clearly be among the most imaginative. Frankly, "The Real Ghostbusters" are funny and hold up better than many 80s cartoons thanks to their "analytical" humor that plays with borderline situations ("How fast can a ghost fly?"), but it's a pity that the characters don't evolve and that the last two seasons become so routine they lost any kind of sense: one has to especially pan the growing tendency to push Slimer, who was transformed from a supporting character into basically the main protagonist, in the foreground, since this way the story lost a lot of its sharpness and tumbled down to silly-childish area. But aside from that, the characters were not dumbed down for kids, except maybe for the ghost Slimer that actually became more popular here than in the movie, turning into a cult show.