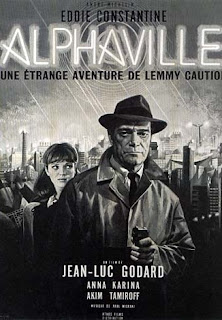 The Future. Detective Lemmy Caution arrives in Alphaville, a town in the middle of the Galaxy where logic is the law and every emotion is forbidden, and goes on to register in the hotel under the false name Ivan Johnson. Caution's secret assignment is to find the missing professor Von Braun. When he does, he discovers Von Braun is working as a scientist in developing deadly weapons for the computer Alpha 60 who is monitoring every inhabitant and planing to rule the Galaxy. Caution kills Von Braun and destroys Alpha 60. He also falls in love with Natasha.

"Alphaville" is one of the most interesting films from Jean-Luc Godard, a somehow fascinating experience. Basically, this is a Sci-Fi film without any special effects in which the futuristic town from the title doesn't distinguish itself in nothing from the Paris of the '60s; the cars, clothes and builings are totally normal fo the 20th century (a coincidence or a message? Because if it's a message, then it's point is that our future could turn to be the same as our past). There are two explanations for it's quality. Firstly, Eddie Constantine is very charismatic as detective Lemmy Caution, mimicking Bogart; one of the strangest situations plays out right at the start when he rejects the courting from a woman "seducer of the 2nd class" in his hotel, and when the hotel manager keeps urging him to change his mind, Caution beats him up and expels him with the help of his gun. Secondly, Godard reduced his occasionally unbearable philosophical babble to the minimum, creating a disciplined Sci-Fi crime film with an opulent mood in which he is cleverly "cheating" with futuristic looking buildings and the normal lamp representing the evil computer Alpha 60, an unusual dictator. A few of Cautions monologues are supreme ("Desire is just a consequence. It can't appear without love" or "My secret is something which never changes, day or night. The past represents its future. It advances in a straight line, yet it ends by coming full circle", alluding to love to puzzle and tease the logical Alpha 60) and the story's messages about a dystopian, totalitarian society whose citizens have forgotten how to feel emotions and were transformed into robots, is rather conclusive.