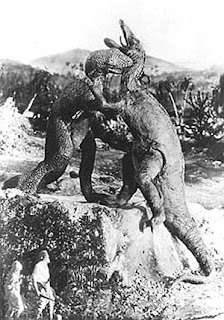 Edward Malone is a young journalist in London. He meets the adventurer John Roxton in a museum and goes on with him to attend a seminar where professor Challenger claims to have discovered living Dinosaurs in Brazil. Everyone claims the professor is mad, but he hires Roxton and Malone to conduct an expedition to bring back evidence, but both of them fall in love with the same girl, Paula. The crew climbs up on a plateau in Brazil and discovers an aggressive Brontosaurus. There are also other dangers; evil monkeys, Allosaurus, an active volcano. The crew manages to escape, capture a living Brontosaurus and bring it to London. But there the beast escapes.

Adventure film "The Lost World", an adaptation of Arthur Conan Doyle's eponymous novel, caused a real sensation during its premiere in 1925 because it was the first feature length film in history that showed living Dinosaurs using stop motion animation, which still has some expressionistic charm and exciting flair despite the progression of visual effects. Some cynical critics commented how the story does not contain anything except large lizards fighting, but "The Lost World" was a visionary film that was courageous enough to show something extraordinary, unconventional, thus heavily influencing the fantasy genre, from Ray Harryhausen's films up to Spielberg's "Jurassic Park". Harry O. Hoyt does not care that much for his characters, but he has a sense for nice details, like the sketches of Dinosaurs in the diary of an adventurer, though the best scenes are the ones including living Dinosaurs, including an Allosaurus grabbing a flying Pterodactyl or pushing a Brontosaurus from the cliff, as well as the Dinosaur "stampede" after a volcano eruption in the finale. Even the finale with an angry Brontosaurus in London seems charmingly dated and fascinating at the same time, but it is a shame that the characters are just pale puppets that don't seem nearly as interesting as the monsters. "The Lost World" is a classic, but inferior to "King Kong".