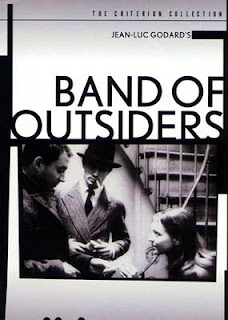 Paris. Franz and Arthur are two clumsy friends who are observing a wealthy house near the river. Mr Stoltz and his wife Victoria live in that house and have a bunch of money that Franz and Arthur would gladly steal. Or at least that's what they heard from the girl Odille who works there occasionally. Franz, Arthur and Odille are together attending an English class, boring themselves to death. Odille agrees to help them in the robbery and falls in love with the stupid Arthur, although Franz is actually in love with her. The first attempt at robbing the house backfires since the door with the money was locked. At the second attempt Franz finds only a very small amount of money, Vitoria dies from the shock while Arthur and his oncle, who suddenly showed up, shoot each other. Franz and Odille run away.

"Band of Outsiders" is an endemic example of simple, accessible comedy in the avant-garde opus of Jean-Luc Godard, the influential and extremely innovative director, but instead of hilarious humor the only thing present here is a mild mix of standard jokes. The story, surprisingly linear for Godard, is revolving around the two dimwitted wannabe criminals, Arthur and Franz, who plan to rob a house, and here and there a few nice jokes are added, like the one in the scene where Arthur gives Odille a letter during English class, in which he wrote; "To be or not to be near your breasts, that is the question". Of course, by following his most inventive period in the '60s, Godard is also treating the viewer with a few original tricks with directing; while Odille is reading Arthur's letter her heart beat can be heard, and when the trio agrees to not speak for a whole minute in the cafe the awkwardly long moment of silence is even intensified with the "mute" environment. But the funniest scene is when Arthur gets shot 6 times but still manages to walk towards his opponent. "Band" is semi famous - apparently Tarantino modeled Thurman's hair due in "Pulp Fiction" to make it look like Oddile's - but it's made a little bit like Allen's comedy "Take The Money and Run"; it's amusing but nothing more. If the unconventional inventiveness was the only thing important for making a good film, Godard would have been the best director of all times, but there are also other ingredients necessary, like a sense of warmth for the characters and a real story.