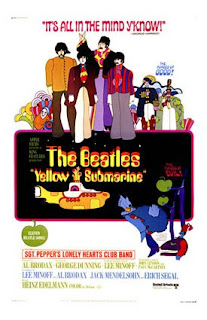 "Once upon a time...or twice...there was a place called Pepperland". People lived in harmony, but one day the Blue Meanie attacked and invaded the country with his army and turned people into stones. But one old man managed to escape in a yellow submarine to find help. He came the UK and found Ringo, who quickly gathered the rest of the Beatles, and decided to follow him and help him save his country. On their way they meet Dinosaurs, giant boots, a nowhere man and holes in space. When they come to Pepperland they beat the Blue Meanies with their songs and notice a group that looks exactly like them.


"Yellow Submarine" is one of the most unusual films of the 20th century: it revolves around Beatles stumbling into an anamorphic, surreal world, while their simple, idyllic assignment is actually to rescue the land of Pepperland from the invasion of the forces of evil, the Blue Meanies, which actually works in the frame of the movie media surprisingly well. "Yellow Submarine" is not a film for everyone's taste—it creates a completely original world, one with no connection to reality, free from any limits and rules, thus the viewers will have to adapt to its frequency or they won't understand anything and lose their orientation—it's almost a trip, a metaphysical experience that expands the imagination of the brain. At its core, there are hidden messages: the Blue Meanies represent the rigid, autocratic and repressive ideology of a limited life, while the Beatles represent freedom, love and a limitless spirit, an ode to breaking the norms.

This shining esoterical film is rich with extraordinary visual style and naive humor, from the sequence where the Blue Meanie is angry at his assistant ("Is everything ready?" - "Yes." - "How many times do I have to tell you that we only use the word NO! Do you understand?" - "No." - "Good!") up until the scene where John takes a black hole and putts it in his pocket ("Can you give me half?" - "What are you going to do with half a hole?"). Precisely because of the fact that there are no rules it can't be said the film broke any or did anything wrong, and a lot of situations are just a pretext for great songs, like "Yellow Submarine" and "All You Need is Love" (in a magically orchestrated sequence where the word "Love" beats the bad guys). An all-encompassing trip to the states of mind, bizarrely senseless "Yellow Submarine" is full of youth's spirit and energy, and managed to turn into a masterpiece without using any device that is usually used when other masterpieces are created. There are many other bizarre films in cinema, but very few of them are like "Submarine"—actually even better than they are bizarre.